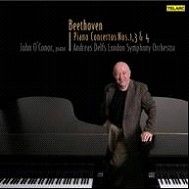 Hailed for his interpretation of Beethoven’s piano concertos, Irish pianist John O’Conor completes the cycle with Nos. 1, 3, and 4. Beethoven composed the first four of his five mature piano concertos for his own concerts. The Concerto No. 1 in C major (1798) was actually the second to be written, but it was given the lower number because the earlier B-flat Concerto (1795) was published several months later. The opening movement of the First Piano Concerto is indebted to Mozart for its handling of the concerto-sonata form, for its technique of orchestration, and for the manner in which piano and orchestra are integrated. The first movement of the Concerto No. 3 opens with the longest introductory orchestral tutti in Beethoven’s concertos, virtually a full symphonic exposition in itself. Of the nature of the Fourth Concerto, the music authority Milton Cross wrote, “[Here] the piano concerto once and for all shakes itself loose from the 18th century. Virtuosity no longer concerns Beethoven at all; his artistic aim here, as in his symphonies and quartets, is the expression of deeply poetic and introspective thoughts.”

‘… in an overcrowded Beethoven concerto market these distinctive and excellently engineered performances are well worth hearing…….Beethoven’s Second and Fifth concertos make for an uncommon yet attractively contrasted CD coupling. More importantly, pianist John O’Conor and conductor Andreas Delfs invest their much-recorded scores with deep feeling, relaxed yet never draggy tempi, and freshly considered details that provide a welcome corrective to the attention-getting elbow-pokes and finger-jabs favoured by certain recent contenders in the name of “interpretation”’ GRAMOPHONE