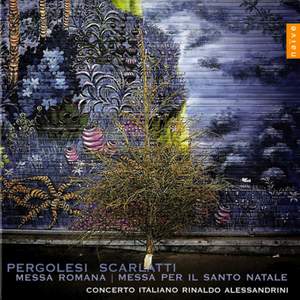 …the sheer sustained energy of Concerto Italiano's singers and instrumentalists is thrilling. — BBC Music Magazine, December 2008, 5 out of 5 stars More…

Of Alessandro Scarlatti’s ten masses, the Messa per il Santissimo Natale (Christmas Mass), which was written in 1707 while Scarlatti was maestro di cappella of the basilica of Santa Maria Maggiore in Rome, handles its polychorality in a solidly traditional manner. The two choirs always appear as two distinct blocks of sound., and throughout the mass there is virtually no doubling of parts, which gives the score a particular richness of timbre. This is further underlined by the presence in the first choir of two sopranos, who are often allotted solo sections. To this should be added the special treatment accorded to the two violins, which follow their own specific sonic trajectory and in fact constitute a sort of ‘third choir’, since they almost never double the vocal parts.

Founder-director of Concerto Italiano, Rinaldo Alessandrini is considered to be one of the most authoritative interpreters of Monteverdi worldwide. His recordings (for Opus 111, Astrée, Arcana, and Deutsche Harmonia Mundi) include not only Italian music, but also Bach and his contemporaries. He has garnered the highest critical plaudits including three Gramophone Awards, two Grands Prix du Disque, and three Deutsche Schallplattenpreise. Concerto Italiano’s revelatory interpretations have revolutionised our perception of seventeenth and eighteenth century Italian music. The group’s groundbreaking recordings of Monteverdi’s madrigals have achieved international benchmark status, establishing it with critics and audiences as the finest ensemble of its kind in Italy today. The impressive array of critical awards received for these recordings include five Gramophone Awards (the only Italian ensemble to have been thus honoured), ten Diapasons d’Or and 2 Diapasons d’Or de l’Année and two Deutsche Schallplattenpreise,

…the sheer sustained energy of Concerto Italiano's singers and instrumentalists is thrilling.

These two Masses were performed in Rome almost 30 years apart by composers both strongly associated with Naples. The Messa diS Emidio is one of only two works that are accepted as authentic Pergolesi Mass settings, although different versions survive. It was apparently composed for a service in the Neapolitan church of S Maria della Stella de' PP Minimi in 1732, but Pergolesi later revised it for several choirs and two orchestras (the version recorded here). Concerto Italiano's 10 singers and 19 instrumentalists (including two horns and two trumpets) make an extraordinary noise in the stacking chords that commence the volatile Kyrie. Some of Alessandrini's singers suffer from dodgy tuning at first, but things soon settle down, and reflective moments are particularly well performed.
The disc concludes with an impressive account of Alessandro Scarlatti's magnificent Messa per ilSantissimo Natale. Written in 1707 for the Roman Basilica S Maria Maggiore, it shows Scarlatti's mastery at fusing Renaissance stileantico for two choirs (with very little doubling) with solo voice passages and imaginative instrumental parts for two violins. Concerto Italiano are on especially good form in Scarlatti's finely woven counterpoint (Agnus Dei is exquisite), though both neglected Masses benefit from Alessandrini's articulately shaped interpretations.