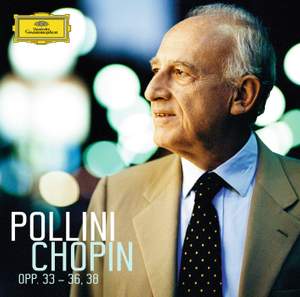 …this recital… proves Pollini's stature as one of the greatest Chopin players of his time. His tone not only sings, but speaks with the eloquence of a great orator. The Sonata's glories included... — BBC Music Magazine, January 2009, 5 out of 5 stars More…

Chopin holds a pre-eminent place in Pollini's career; in 1960 he was awarded the first prize at the International Chopin Competition in Warsaw and appeared in the same year at La Scala, Milan, playing Chopin's First Piano Concerto under Sergiu Celibidache. This was the start of his extraordinary musical career. Despite this huge success, Pollini ceased performing Chopin in order not to become stamped as a mere Chopin interpreter. But he returned to him many times later

Maurizio Pollini says that Chopin composed almost exclusively masterpieces and that he didn't tolerate music that had no thinking behind it. After the successful release of the complete Chopin Nocturnes in 2005 (Echo Award, Grammy, Victoires de la Musique Classique Award), the Italian maestro again turns his attention to Chopin: he has re-recorded the famous Sonata no. 2 in B flat minor, op. 35 (recorded in 1984 and released in 1986) and the Ballade no. 2 in F (recorded and released in 1999) and added the Mazurkas op. 33, Waltzes op. 34 and Impromptu no. 2 in F sharp major, op. 36. All of these works were composed in a relatively late phase of Chopin’s career (1834–1839) and display the great variety of his art

The message is simple: one of the greatest pianists of our times interprets Chopin, a composer that moves both classical music connoisseurs as well as a wider audience. As Pollini says: "I play Chopin more freely than I did in my youth, or at the time of the Chopin competition. I like my old recordings, but some of them strike me today as rather straight." Reason enough to make classical-music fans curious to hear how Pollini's Chopin sounds nowadays

…this recital… proves Pollini's stature as one of the greatest Chopin players of his time. His tone not only sings, but speaks with the eloquence of a great orator. The Sonata's glories included a chilling transformation of tone in the final moments of the Funeral March and a unison finale played with such fluidity that you can barely hear the individual notes slide into one another. This disc is coming to my desert island.

Pollini begins with one of the finest accounts of the Ballade No 2 that I have heard, the maelstrom that erupts after the pastoral first page sounding like a howl of despair.

He has recorded the two major works here, the second Ballade and the B flat minor Sonata before, but both of these are titanic performances, full of perfectly focused power and high-tensile lyricism...the sheer aristocratic authority of the playing sweeps all before it. On this kind of form, Pollini has few pianistic peers in the world today.