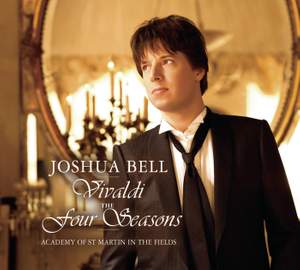 Academy of St. Martin in the Fields

If you like your Baroque music with a Romantic gloss, this will be for you. — BBC Music Magazine, December 2008, 3 out of 5 stars More…

As an exclusive Sony Classical artist, Joshua Bell has released a series of albums to critical and popular acclaim. Known both for his riveting artistry and his daring choice of repertoire and collaborators, Bell is no less innovative in the way he reinvigorates Vivaldi’s perennial favourite. Bell explains his take on Vivaldi’s classic: “You will never hear two versions of The Four Seasons that are alike, which is why I think there is always room for another view of the piece. My version is very personal.”Widely considered one of the premiere violinists of his generation, Bell is joined on this studio release by the celebrated musicians of the Academy of St. Martin in the Fields, who toured the work with him prior to the recording sessions. This recording of The Four Seasons is coupled with another masterpiece of Baroque virtuosity, Giuseppe Tartini’s The Devil’s Trill Sonata.

If you like your Baroque music with a Romantic gloss, this will be for you.

A big-name violinist, the Academy of St Martin in the Fields, John Constable tinkling away on a ten-ton Goble – this Seasons is a bit like returning to old times. Any Vivaldi-lover will have these iconic concertos in their collection already, probably several times over, but the merest glance at the packaging of this one will tell you that it is not aimed at them anyway. So what will the 'I want a Four Seasons but by somebody I've heard of' clientele get for their money? Well, mighty fine playing for certain: Bell has the lightness and quickness of Mercury in passagework, and a smooth and sweet lyricism no less divine in the slower sections. Not a single ugly noise emanates from his instrument, and he is well matched by the ASMF, their sound ample and softly comfortable yet clean and clear. It is doubtful if you will ever hear a more purely beautifully rapt ensemble rendition of the slow movement from Spring, for instance.
What is missing amid all this high-class musicianship is the inventive spark of excitement these pieces can provoke in so many players, especially through its descriptive elements. All right, not everyone has to give themselves over entirely to being dying stags, drunken peasants or barking dogs, but these performances would surely benefit from the greater rhythmic and dynamic flexibility a bit more pictorial imagining could bring.
The fill-up is a thoughtful choice, however; Tartini's Devil's Trill Sonata, adroitly played with extra-romantic, stratospheric cadenza, as if to Bell the Devil were ne'er a foe.

…Bell has the lightness and quickness of Mercury in passagework, and a smooth and sweet lyricism no less divine in the slower sections. …he is well matched by the ASMF, their sound ample and softly comfortable yet clean and clear.