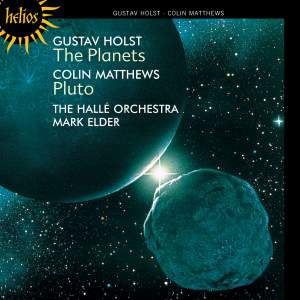 The Hallé Orchestra, with The Ladies of The Hallé Choir, Mark Elder

I. Mars – The bringer of war

II. Venus – The bringer of peace

IV. Jupiter – The bringer of jollity

When Gustav Holst composed his celebrated suite 'The Planets' during the First World War, the solar system was bounded by the orbit of Neptune ('The Mystic' in Holst's astrological subtitle)—which Holst naturally placed at the end of his masterpiece. It was not until fifteen years later that American astronomer Clyde Tombaugh, trying to find the reason for peculiarities in Neptune's orbit, realised that there was another planet further out whose gravitational pull was influencing it. And so was discovered the dark, remote and mysterious world of Pluto, named after the king of the Underworld. The discovery was made but three years before Holst's death, but he never expressed any intention of adding it to his by-then famous work. Sixty years later, invited to do so by The Hallé Orchestra, the challenge was taken up by Colin Matthews whose 'Pluto—The Renewer' emerges eerily from the disappearing final bars of 'Neptune'. This was the first recording of Holst's 'Planets' with the additional planet, sumptuously recorded by Tony Faulkner in Manchester's Bridgewater Hall.

The CD also includes Holst's late Lyric Movement for viola and chamber orchestra, written in 1933, the year before the composer died.

Colin Matthews has finally completed the picture with Pluto, and hearing it on this fine recording alongside Holst’s original, the scale of his achievement becomes clear. Fast, pacy and light like the solar winds of the planet itself, Colin Matthews has enhanced our enjoyment and appreciation of Holst’s original work, beautifully and movingly played here by the Hallé Orchestra under Mark Elder

Pluto is an exhilaratingly fleet essay, laced with Holstian allusions. Elder also presides over a perceptive account of the haunting 1933 Lyric Movement … Here’s to more high-quality productions from this new partnership

Holstians will be grateful for a beautiful account of the melancholy Lyric Movement, but for those mainly interested in The Planets this has few rivals as a performance