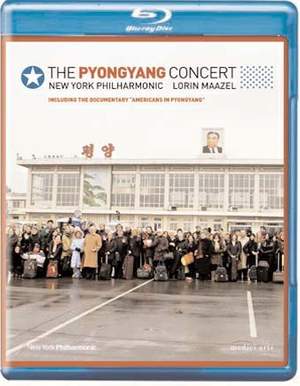 Recording of the Week,  Americans in Pyongyang

The New York Philharmonic’s visit to North Korea with Lorin Maazel is charted in an insightful and moving documentary, culminating in a concert of music by Wagner, Dvořák and Gershwin.

Hundreds of millions watched the historic concert on television. Now exclusively on DVD: the New York Philharmonic concert in Pyongyang.

Music became diplomacy when this courageous musical project united Americans and North Koreans. The musicians went from strength to strength in a beautiful programme which illustrated the excellence of the orchestra. Lorin Maazel once more proved his reputation as one of the best contemporary conductors. Includes previously unreleased documentary with 53 min of exclusive material. The first classical concert release on Blu-ray Disc offers professional technical standards in the comfort of your own home.

"Astounding was the fact that the orchestra played the North Korean national anthem and the Star Spangled Banner on a stage flanked by flags of both nations … a rare moment of harmony, proving the power of music that bridges the divides." The Korea Times (South Korea)

"For at least 90 minutes in a theatre in Pyongyang it was possible … to believe that 55 years of cold-war hostility were coming to an end." James Miles, The Economist

Both fascinating and enjoyable, this comes warmly recommended.