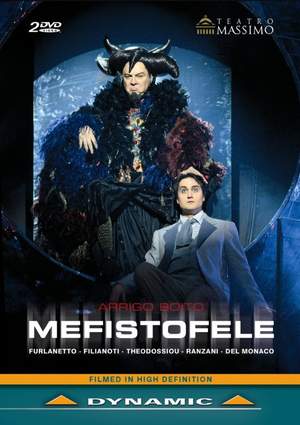 This is an opera (I conclude) to be heard and not seen. The opportunities for excess are just too many and too tempting. The production avoids stained-glass religiosity but resorts to a symbolism... — Gramophone Magazine, Awards Issue 2008 More…

Boito’s Mefistofele is an opera that focuses on the eternal struggle between Good and Evil, in a path made of temptation, lust and redemption that director Giancarlo Del Monaco sets in contemporary society. At the beginning the location and the costumes recall the German expressionism of the 1930s that are soon abandoned to become a glittering Vegas-like location.

The once popular opera is nowadays rarely performed. It was thus unusual that this opera was chosen to be broadcast as part of the DDCinema project in cinemas throughout Europe. Dynamic are now proud to present this acclaimed production on DVD which includes special features including interviews with the cast (Furlanetto, Theodossiou, Filianoti and Del Monaco).

This production which was performed at the Teatro Massimo features artists of the highest standing: the bass Ferruccio Furlanetto is one of the most celebrated and critically acclaimed singers of the last thirty years and appears in the greatest theatres and festivals all over the world. Alongside him we find a young but already well-known tenor Giuseppe Filianoti, and the Greek soprano Dimitra Theodossiou an artist of international calibre with great vocal and performance talents.

The performance was well received. Italian critics gave only the highest praise to the cast: “[Furlanetto] brought real conviction to Boito's occasionally surreal libretto, and his oaken voice truly filled the theatre (which has ideal acoustics).” “Giuseppe Filianoti sang with ideal smoothness of line and ingratiating tone.” “All the singers were well supported by conductor Stefano Ranzani, who paced the work well… [and the choral singers and dancers] conveyed genuine relish in bringing life to what on this occasion proved to be a totally absorbing theatrical experience.”

This is an opera (I conclude) to be heard and not seen. The opportunities for excess are just too many and too tempting. The production avoids stained-glass religiosity but resorts to a symbolism scarcely less crude. …Furlanetto in the title-role, is splendidly sonorous and sometimes memorable in his inflections, but lacks physical dominance and his timbre hasn't the character.