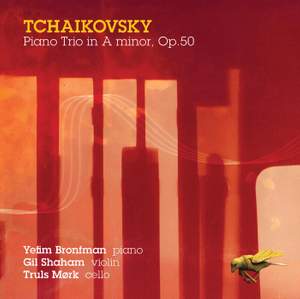 Tchaikovsky's Piano Trio is a masterpiece of the genre. The finest modern recording has been on BIS with Freddy Kempf… That's challenged now by… commanding contribution in his new recording;... — Gramophone Magazine, November 2008 More…

In 1880 Tchaikovsky’s patron, Nadezhda von Meck, asked Tchaikovsky to write a work for her ‘house’ trio (which included the young Debussy), a request he initially refused. However, after Nicoai Rubenstein’s death in 1881 Tchaikovsky returned to the idea of a trio as a means of paying tribute to his friend.

Tchaikovsky rebuked the suggestion that the twelve variations of the second movement, with their unusual structure - theme and variations - depicted different aspects of Nicolai’s life. In fact Tchaikovsky wrote this music for the enjoyment of the performers which accounts for the trio’s popularity amongst chamber musicians.

This recording features an established trio each with high profile international careers. Pianist Yefim Bronfman apears regularly with the world’s greatest orchestras and has won widespread praise for his solo, chamber and orchestral recordings.

Truls Mørk’s reputation as a cellist of fierce intensity and grace has been built on performances throughout the world. He performs with the most distinguished orchestras including the New York, Berlin, Vienna, and London Philharmonic Orchestras.

Finally and arguably most importantly, violinist Gil Shaham is internationally recognised as one of today’s most virtuosic and engaging artists. His wide discography includes many award winning discs, including multiple Grammys. Gil’s most recent recordings have been produced for his own label, Canary Classics, which he established in 2004.

‘Shaham is warm and elegant, Mørk poised and thoughtful...Bronfman is a heart-on- sleeve type pianist, mediating grandly between his colleagues.’ Chicago Tribune, 2002

Tchaikovsky's Piano Trio is a masterpiece of the genre. The finest modern recording has been on BIS with Freddy Kempf… That's challenged now by… commanding contribution in his new recording; he's equally bold and strong in the bolder moments of the opening Pezzo elegiaco and his unforced virtuosity is as memorable... Gil Shaham and Truls Mørk are just as warm and sensitive, spacious and charismatic, especially in the quicksilver finale which moves from resoluto and con fuoco to a very touching closing Andante lugubre.