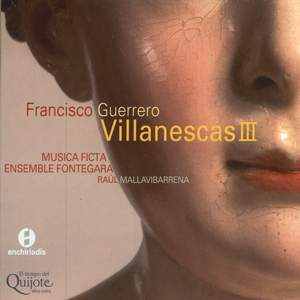 The third release in this series from Enchiriadis of the complete works of Francisco Guerrero first published in Venice in 1589 under the name “Canciones y Villanescas Espirituales.” Following the high critical and public acclaim established with Volumes 1 & 2 this release, featuring 22 more of Guerrero’s sacred and secular vocal compositions, promises to be every bit as stimulating and revealing.