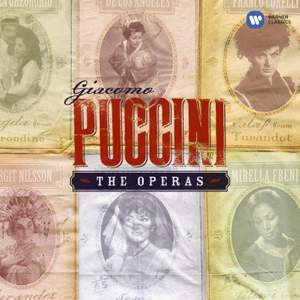 O Simone?...Simone? (all except Schicchi)

Dunque era vero! (all except Schicchi)

A me i poderi di Fucecchio (tutti)

Ah! per l'ultima volta! (Timur, Liù, Ministers, Calaf, All others)

Puccini is one of today’s most popular operatic composers. His works dominate the programmes of the world’s leading opera houses, and his compositions are heard frequently on radio and television, in film soundtracks and in TV commercials.

The recordings (all stereo) come from EMI’s unrivalled operatic catalogue and feature some of the greatest stars in the world of opera.