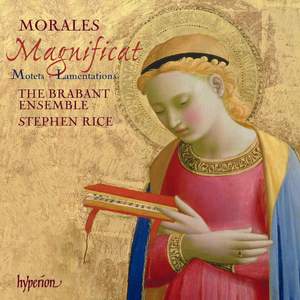 Recording of the Week,  Beautiful Messiah and Exquisite Morales

Harry Christophers and The Sixteen offer a Messiah of ‘formidable achievement’, whilst The Brabant Ensemble present a compelling programme motets and lamentations by the Spanish Renaissance composer Cristóbal de Morales.

Morales was the first Spanish composer to achieve true international fame, and was described by contemporaries as ‘the light of Spain in music’. Although he is relatively well-represented in recordings, a few pieces have attracted the attention of performers at the expense of the majority of his output. This recording aims to begin filling that gap by presenting works which are so far underexposed, yet which are of extremely high quality.

The longest work on this disc is the Magnificat primi toni. In 1542 Morales wrote a set of eight Magnificats (one in each of the ‘tones’—‘keys’, in modern terms). The prevailing liturgy of the day, however, required the canticle to be sung alternatim, with alternate verses sung to plainchant; to adhere to this, and perhaps to double his earnings, Morales split his compositions in half for publication—apparently two Magnificats per ‘tone’, each with half the verses only set to music. And so it has remained to this day. This is the first recording of any of Morales’s Magnificats to present the entire work as the composer originally intended.

The Brabant Ensemble and Stephen Rice are rapidly confirming themselves as major contenders in the field of Renaissance polyphony. Their performances and recordings are praised both for the integrity of their scholarship and also for their unique vocal balance. This is the group’s fourth recording for Hyperion, and one which we expect to be as favourably received as have been their discs of Crecquillon, Manchicourt and Gombert.

The young Oxford choir turns its immaculate ensemble, lucid diction and faultless tuning to the Spanish composer Morales. His Lamentations flow with exquisite sadness … the lines blend like threads in a tapestry … the selection of motets is rich with dynamic contrast, expressivity and downright beautiful
singing

This recording suggests how central is Morales's position within the High Repertoire.
Often spoken of as a precursor of Palestrina, here (as in the Lamentations settings that open the programme) he seems just as clearly to prefigure Lassus's own penitential mode (especially at 'Nun: Vigilavit'). Stephen Rice leaves aside the Mass repertory in favour of the motet. Following the Lamentations set, this selection is mostly of Marian pieces. The single exception is an impressive celebratory piece commemorating the elevation of Ippolito d'Este, brother of the Duke of Ferrara, to the cardinalate. Unlike some of the Marian motets this has not been recorded before, and it shows off a more public side of the composer.
The motets range in scoring from four to six voices, but whatever the number of voices, the counterpoint is always perfectly intelligible.
Obviously that's due to the clarity of the composer's textures, but it also reflects well on the Brabant Ensemble, who turn in very solid readings, subdued or serene, as text and music demand. In the Magnificat, the intensity steps up a notch, reaching an impressive climax.
Indeed, the ensemble quality here belies the fact that only four voices are involved (except at the very end); this is the Brabant Ensemble at their most vigorous and confident. For this reading, Rice opts for the polyphonic setting of all the verses, rather than alternate half of them with plainchant, a common practice of the time. In a fast-growing discography, this is a valuable addition.

…the Brabant Ensemble… turn in very solid readings, subdued or serene, as text and music demand. In the Magnificat, the intensity steps up a notch, reaching an impressive climax. …the ensemble quality here belies the fact that only four voices are involved (except at the very end) this is the Brabant Ensemble at their most vigorous and confident.

Music of astonishing beauty and rapt polyphonic intensity, which the voices of The Brabant Ensemble unfold with perfect poise