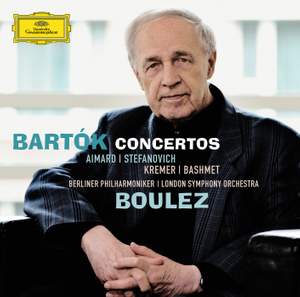 Gidon Kremer is by turns sublimely lyrical and bracingly driven in the First Violin Concerto… the interplay with the woodwind of the Berlin Philharmonic in the second movement is delightfully... — BBC Music Magazine, November 2008, 4 out of 5 stars More…

The living legend: still innovative, radical and original. Pierre Boulez concludes his acclaimed Bartók Concertos project, which has received the highest accolades, with an album featuring the Viola Concerto, Violin Concerto no.1 and the Concerto for Two Pianos, Percussion and Orchestra

For this recording, Boulez has once again gathered an extraordinary team of musicians: Yuri Bashmet, Gidon Kremer, Pierre-Laurent Aimard – with his long-term recital partner Tamara Stefanovich – and two of the world’s most esteemed ensembles: the Berliner Philharmoniker and London Symphony Orchestra

DG is particularly delighted that its exclusive artist Pierre-Laurent Aimard teams up with Pierre Boulez, with whom he shares a strong artistic partnership. The combination of two such insightful musicians as Aimard and Boulez with one of the world’s great orchestras promises to be something very special

A recording that brings together some of the greatest musicians of the modern age in their admiration for the Hungarian master composer of the 20th century: Boulez’s Bartók cycle has all the ingredients to become the benchmark recording of this repertoire

Gidon Kremer is by turns sublimely lyrical and bracingly driven in the First Violin Concerto… the interplay with the woodwind of the Berlin Philharmonic in the second movement is delightfully cheeky, as it is with Yuri Bashmet in a masterful account of the Viola Concerto.

And so Pierre Boulez's DG survey of Bartók's major orchestral works draws to a close. This final instalment opens with an Abbey Road taping of a masterpiece (the two-piano Sonataturned- Concerto) then alternates two fouryear- old Berlin Philharmonic recordings – the richly scored and erotically charged First Violin Concerto and the pared-down, largely ascetic Viola Concerto, an incomplete last testament rendered performable by the violaplayer Tibor Serly. Yuri Bashmet treats the opening with considerable freedom and is consistently responsive to the score's more lyrical passages, though both he and Boulez bring a touch of menace to the closing moments of the slow movement.
Gidon Kremer sounds equally unfettered at the start of the Violin Concerto's gorgeous first movement but come the dizzy antics of the Allegrogiocoso he engages more with play than with reverie. In fact from around 2'20” he sounds positively bored – very unlike him (he's a favourite player of mine).
Boulez has spoken about the 'Concerto' orchestration of the Sonata for Two Pianos and Percussion as adding 'a different dimension' to the Sonata, especially in the first movement, and he substantiates his claim with a performance that is typically transparent and attentive in matters of balancing, the brass fanfares at around 9'16” in the first movement so vividly reminiscent of parallel passages in the Second Piano Concerto. Pierre-Laurent Aimard and Tamara Stefanovich, although technically brilliant, keep a relatively low profile, which makes for added intimacy in the first movement's busy, often humorous badinage but rather mutes the rhythmic impact of the finale's opening. Greatly preferable is the stark, demonically driven spirit of the original – the Concerto pulls punches that the Sonata delivers in full – but Boulez's performance states a strong case for the plusher concerto alternative.