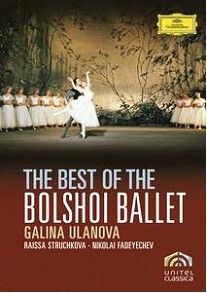 Asafyev: Dance of the Tartars from The Fountain of Bakhchsarai

Glinka: Ivan Susanin (A Life for the Tsar): Polonaise

Glinka: Ivan Susanin (A Life for the Tsar): Krakoviak

Paul Czinner’s acclaimed 1956 filming of the Bolshoi Ballet’s first-ever tour of Great Britain, which preserves two complete programs: a Bolshoi Highlights Program featuring Raissa Struchkova in the Walpurgisnacht from Gounod’s Faust, and Galina Ulanova in The Dying Swan and a thrilling performance of Giselle with Ulanova and Nikolai Fadeyechev

Also included in the Highlights Program is the celebrated Spring Water ballet, set to music by Rachmaninoff and danced with dazzling virtuosity by the outstanding members of the Bolshoi troupe

The Orchestra of the Royal Opera House, Covent Garden, and the Bournemouth Symphony Orchestra are under the direction of Gennadi Rozhdestvensky and Yuri Faier

In Dance Magazine, critic Clive Barnes eulogized the artistry documented here: “Everything the Russian critics have written about her is true. The impeccable technique, the expressive body, the intellect, the informed face; yet Ulanova has something criticism could never define, something you might look for in Shakespeare’s sonnets.”

“The greatest performance by an interpretive artist within my experience” – Clive Barnes, Dance Magazine (1998) [on Ulanova’s Giselle as seen documented here]