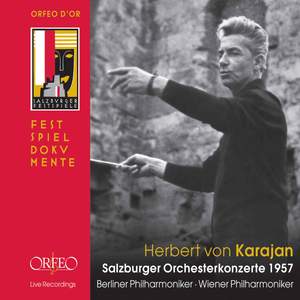 1957 was Herbert von Karajan's first year as artistic director of the Salzburg Festival, and he was determined to leave the world in no doubt about his versatility as a conductor. Four orchestral concerts featured not only core works from the symphonic repertory but also music with which his name is nowadays only rarely associated.Above all, however, he imported the Berlin Philharmonic and divided the concerts between them and the Vienna Philharmonic, a body of players that had previously had no rivals in Salzburg.At the 1957 Festival's opening concert, it was Vienna's leading orchestra which, in keeping with tradition, performed Bruckner's Eighth Symphony in a reading that was arguably more 'earthy' and less otherworldly than other performances under Karajan. In particular, the tone colours of the strings and winds, applied with particular assurance and power, enabled the conductor to achieve a sense of the greatest solemnity entirely commensurate with the occasion.The following day the Berlin Philharmonic and their principal conductor brought to an all-Mozart programme the virtuosic and lively interpretative style that orchestra and conductor shared.The programme on this occasion included the 'Haffner' and 'Jupiter' Symphonies and the C major Piano Concerto with Géza Anda as the soloist. For their second concert with Karajan, the Berliners returned to the Mozarteum - a venue that is nowadays hard to imagine as the setting for such an occasion - for a programme made up entirely of contemporary works, namely, the world première of the Sinfonia parabolica by Theodor Berger, a pupil of Franz Schmidt and Erich Wolfgang Korngold, Gottfried von Einem's Piano Concerto and Honegger's Symphonie liturgique, this last-named work in an interpretation that the conductor had the courage to invest with real emotional weight. Honegger's symphony is very much a confessional work, allowing Karajan to forge a link between it and the piece that he conducted on 22 August in the Felsenreitschule: Brahms's German Requiem. Here the Vienna Philharmonic was joined by the Vienna Singverein, a chorus that the conductor was to use in many of the great works of the choral repertory over a period of several decades, and by the two soloists Lisa Della Casa and Dietrich Fischer-Dieskau.The result was a performance whose very special qualities can perhaps be best appreciated only at a distance of half a century.