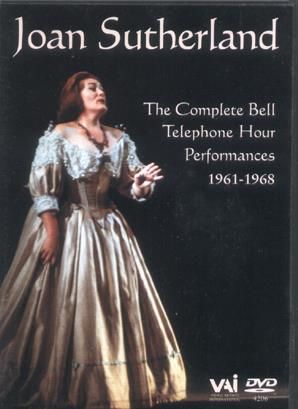 In the early 1960s, the Australian soprano Joan Sutherland emerged as an opera star of the first magnitude, setting new standards of vocal excellence in the bel canto repertoire that have yet to be matched. Fortunately, Miss Sutherland's American career included numerous television appearances, prominent among them her performances on the Bell Telephone Hour, from 1961to 1968. The earliest of these telecasts marked Miss Sutherland's American television debut, less than a month after her New York debut (in a concert performance of Bellini's Beatrice di Tenda) and well before her Metropolitan Opera debut (as Lucia, on November 26, 1961).