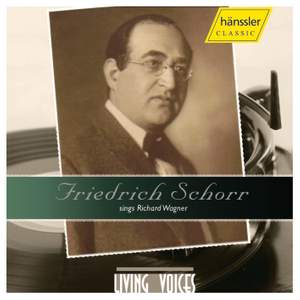 Friederich Schorr was the leading heroic baritone in Germany during the 1920s. His studio and live recordings reveal him to have been the perfect embodiment of a Wagner singer, highly sensitive and extremely subtle in his interpretations. Schorr’s Hans Sachs was at the same time a shoemaker and a poet, a master craftsman and a singer, a realist and a daydreamer; a man rooted in tradition but open to innovation, straightforward but artful, cheerful but melancholy.

The son of the well-known cantor Mayer Schorr, Friedrich Schorr was born in Nagyvárad (Hungary) on September 2, 1888. In 1892 the family moved to Vienna, where his father had been appointed principal cantor at the central synagogue. Gustav Mahler was so taken with the cantor’s singing that he advised him to retrain as a heroic tenor. His five sons reputedly also developed exceptional vocal abilities, but he and his wife balked at the idea of their singing anywhere but in the synagogue.

Schorr appeared 356 times at the Metropolitan Opera, giving his farewell performance on March 2, 1943 in the role of the Wanderer in Siegfried. In the autumn of the same year he assumed direction of the Manhattan School of Music. He went on to produce operas at the New York City Opera and to direct an opera studio in Hartford, Connecticut. The many major singers he taught included Cornell MacNeil, Ezio Flagello, Grace Hoffman, Marilyn Tyler and Carlos Alexander. Friedrich Schorr died in