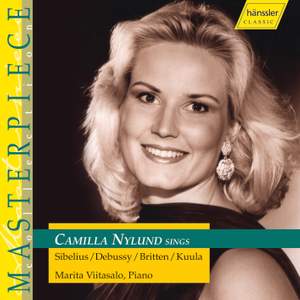 Kuula: Purjein kuutamolla (Sailing in the Moonlight), Op. 31a, No. 1

Now The Leaves Are Falling Fast

As It Is, Plenty

Camilla Nylund made her debut in 1995 as Micaëla in Hanover, where she was immediately offered a contract through 1999. She has appeared there as the Countess in The Marriage of Figaro, Pamina, Fiordiligi, Antonia in The Tales of Hoffmann, Marie in The Bartered Bride, Agathe in Der Freischütz, Eva in Die Meistersinger, the Countess in Capriccio, Rosalinde in Die Fledermaus, Mimi and Lisa in Léhar's The Land of Smiles.

The current recital features a sampling of Ms. Nylund's expressive mastery of the Lied, Chanson and Song repertoire and presents a choice sampling of music of her Finnish countrymen, Sibelius and Kuula.