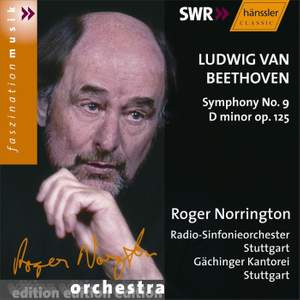 Sixteen years after Sir Roger Norrington's controversial readings of the Beethoven Symphonies, the maestro returns to this repertoire with a new recording of the Ninth Symphony. This recording is the first release of all nine symphonies, schedyled to be completed by mid-2003.

Recorded from a live performance during the European Musicfest in Stuttgart in the summer of 2002, these new performances will be a fascinating document for collectors, as they experience how Norrington's conception of these scores has grown.

Performed on modern instruments, by an orchestra steeped in the traditions of the German Romantic School, an artistic tension is set in motion, and both conductor and the orchestra are transformed.

As with Sir Roger Norrington's acclaimed recording of Beethoven's Missa Solemnis (Hänssler 93006) “[Norrington] has a way of seeing the piece whole which makes the others' insights seem patchier.. “ quote, BBC Music Magazine. The choice of instruments, whether old or new, plays a subordinate role for Roger Norrington. For him, it is the very essence of the work, with all its internal tensions and unique logic, as originally conceived by Beethoven that music be revealed.