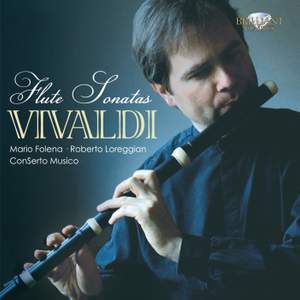 Roberto Loreggian’s playing is admirable, with a subtle sense of rhythm and an ability to project the most intricate part-writing. — Early Music Review

Though several of Vivaldi’s most delightful concertos are written for the flute, he left relatively little chamber music for the instrument: the ‘Il Pastor Fido’ set which used to be attributed to him is now known to have been composed by Nicolas Chédeville. On this valuable new recording, Mario Folena and Roberto Loreggian offer what seems to be all that is left of Vivaldi’s output for the genre, informed by the latest scholarship and in delightful and lively period-instrument recordings. They couple it not with the previously recorded ‘Il Pastor Fido’ sonatas, but with a genuine rarity: an arrangement of ‘Spring’ from The Four Seasons made by Jean-Jacques Rousseau, the composer and philosopher who argued that, in politics as in music, Man should return to first principles.

Roberto Loreggian’s playing is admirable, with a subtle sense of rhythm and an ability to project the most intricate part-writing.