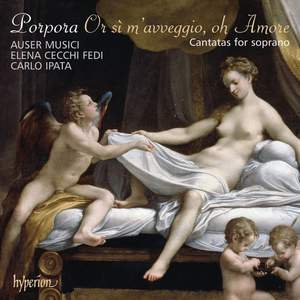 Some of the most genuinely enjoyable and captivating performances of eighteenth-century vocal music I have heard on disc for a very long time … these are brilliantly written recitatives, clearly,... — International Record Review More…

Porpora is best known for his open rivalry with Handel on the London operatic scene, and is remembered more for the ferocious controversies that raged between the two men than for his music. But this dazzling new disc from Auser Musici shows the composer to be a profound musician with a rich and wide-ranging output, a mastery of compositional technique and a keen sense of theatre and dramatic pacing. Stylishly performed and recorded, this disc will surely force a reappraisal of Porpora’s artistry and reawaken interest in this great composer.

The cantatas recorded here clearly display the principal features of Porpora’s compositional style, notably his legendary melodic elegance, the remarkable fidelity of the music to the sentiments expressed in the text, and his skill in writing recitative, which was regarded as exemplary (more than one author described him as ‘the father of the recitative’). Stefano Aresi writes in his illuminating booklet notes: ‘Today, after centuries of neglect, all these characteristics surge from the pages of his scores with explosive force, showing how groundless are the widespread stereotypes which portray Porpora exclusively as a skilful purveyor of bravura arias for the use of his pupils. In the aesthetics of so profound and refined a musician, virtuosity was a means to an end: his requirement of an extremely high level of technique from performers was an instrument to enable him to obtain a seductive, spellbinding naturalness of style, necessary in its turn to create for the intellect and the senses a pleasure that would ‘move the passions’.’

This is Hyperion’s third disc from Auser Musici, a vocal and instrumental ensemble which, taking its name from a lost Etruscan river in the plain of Pisa, brings together instrumentalists and singers with an international reputation for historical performance practice. Auser Musici’s performances, in concert and on disc, are the result of a long-term commitment involving a positive collaboration with musicologists in the research of original sources.

Some of the most genuinely enjoyable and captivating performances of eighteenth-century vocal music I have heard on disc for a very long time … these are brilliantly written recitatives, clearly, but with Fedi’s clarity of diction and conviction of delivery, they are transformed into something truly
exceptional. Yet to single out the recitatives, when the instrumental colouring of the arias and sinfonias is so magical, is to do a major disservice both to Porpora and to Auser Musici … here is music-making of such infectious happiness that this disc is destined to be a constant companion for the
foreseeable future

Soprano Elena Cecchi Fedi’s singing is both beautiful and vocally deft, and the playing of the Italian group Auser Musici is emotionally responsive and dramatically alert to match. The opening cantata, Or sì m’aveggio, oh Amore, with its rocketing cello
obbligato, is particularly fine