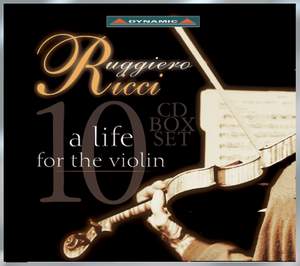 Ruggiero Ricci: A Life For The Violin

Mattheson: Air in B minor

No. 8 in E flat major: Maestoso

No. 9 in E major: Allegretto

Paganini: Variations on 'God save the King', Op. 9

Paganini: Tarantella in A minor, Op. 33, MS 76 (version for violin and guitar)

Tarantella in A minor (version for violin and guitar)

Introduction and Variations in F minor on Dal tuo stellato soglio from Rossini's Mose in Egitto, Op. 24, MS 23 (arr. for violin and guitar)

No. 4. Tarantelle in A minor

The history of musical performance is full of musicians who, after being appreciated in their youth, as adults never managed to repeat the achievements of their childhood and adolescence. Ruggiero Ricci, too, was of course a child prodigy: but then he was also an adolescent prodigy, a young prodigy, an adult prodigy. And now, fully eighty-three years old, he can safely be defined as an elderly gentleman prodigy, a man who astonishes all those who hear him not only with his mastery of technique, which is still stunning despite the passing of years, but also through his still lively, almost disturbing desire to discover something new and to take on increasingly demanding violin challenges.

This 10-CD box set traces the most significant stages in Ricci’s career: his first recordings from the 1930s, his outstanding late 1940s performance of Paganini’s 24 Caprices, his beautiful recital with Martha Argerich in 1979, his recent recordings on Dynamic.