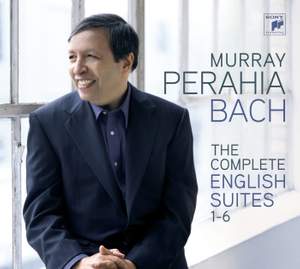 Perahia's Sarabandes are firmly etched and the Courantes propulsive. Ornaments are adventurous and he brings rhythmic drive to the quicker movements. — Gramophone Magazine, November 2008 More…

Presented as a double CD digipack, this attractive package contains an introductory note by Murray Perahia as well as extensive liner notes.

The initial release of these recordings garnered great critical acclaim, enhancing Mr. Perahia’s reputation as one of the greatest living interpreters of Bach’s music.

Perahia's Sarabandes are firmly etched and the Courantes propulsive. Ornaments are adventurous and he brings rhythmic drive to the quicker movements.

Perahia’s performance of these six suites on the piano is a marvel of vitality and voice-leading. The vitality does not only take the form of digital impulsion and impeccable clarity of texture, but irradiates the deep and long-breathed meditations that are the sarabandes...Here, if not elsewhere in the music, intellectual and emotional intensity are indivisible: we are brought into that world of refined concentration that is Bach’s peculiar gift to us.

Perahia displays with startling clarity the emotional tensions that lie within the counterpoint of each movement while never losing sight of the rhythmic vitality essential to the overall shape of each suite.