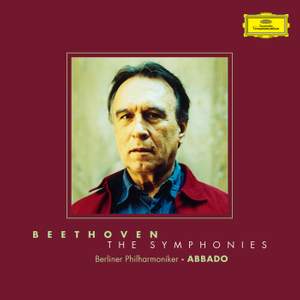 One could say, briefly but not inaccurately, that this is the antithesis of Karajan. Where he was smooth, this is rugged. Where he went in for broad tempos in slow movements, Abbado moves things... — BBC Music Magazine, September 2008, 5 out of 5 stars More…

This Capbox set updates the box set 4690002, which contains the cycle recorded in Berlin in 2000. This new set contains recordings of Symphonies 1 – 8 made in Rome in February 2001. No. 9 is a recording from Berlin made in May 2000 (the same recording that appeared in the “old” set). While retaining aspects of the look of the previous set, the new set has been completely redesigned in capbox format. It includes a new booklet article by Italian journalist Angelo Foletto, who interviewed Abbado about the reasons for releasing the new set of recordings.

One could say, briefly but not inaccurately, that this is the antithesis of Karajan. Where he was smooth, this is rugged. Where he went in for broad tempos in slow movements, Abbado moves things along, without anything that we would recognise as a real adagio in the whole series. Listening to Abbado's set... really does make you hear these works afresh, and no lover of Beethoven can fail to revel in and learn from it.

The finest of fine lines can divide routine and revelation. Seven years on from the relase of a studio set of the nine, Abbado reveals doubts of his own. The Ninth excepted, the original DG set has been consigned to history, its place taken on CD by live performances given by Abbado and the Berliners in Renzo Piano's acclaimed new Santa Cecilia hall in Rome in February 2001. Originally recorded for DVD, this Rome cycle now emerges as Abbado's 'legacy' choice.
Hindsight tells us that the original set was premature, recorded before the project had established a purpose beyond that of providing the obligatory Beethoven cycle Abbado owed the orchestra; recorded, too, before players or engineers were conversant with the soundscapes needed to create Abbado's vision of a vital yet at the same time properly autochthonous Beethoven manner.
Where the Berlin set lacked emotional intensity and sonic immediacy, the Rome cycle provides both. As early as the slow movement of the First Symphony, it is evident that the warmer, more intimate Rome sound is helping concentrate our minds; the performance too is more strongly characterised, the finale markedly so.
The First, Third, Fifth and Seventh symphonies are the principal beneficiaries here. An examination of the relative timings tells us little beyond the fact that the Rome performances may occasionally be a touch broader. In practice, this has little to do with tempo, everything to do with shape and commitment – with concentration of tone and intensity of phrasing.
Abbado's claim that the Rome performances 'marked a significant advance in terms of style, spirit, and technique' is best illustrated in the Seventh Symphony. In Berlin, the finale seemed driven and over-quick; in Rome, everything is absorbed and of a piece. The more closely focused sound also helps. The individual string sections, the violins in particular, are far more clearly defined, an important factor when Abbado's retention of non-antiphonal layouts might be thought (wrongly as it turns out) to take the edge off the drama.
With the even-numbered symphonies it is more a case of swings and roundabouts. The Rome Pastoral is less vernal, the Eighth fiercer and more monumental, albeit not entirely settled rhythmically in the outer movements. The Fourth is again outstanding, though fuller-bodied and more overtly songful. The Berlin Ninth outstandingly well realised finale. What happened remains. It is a pretty good performance with an outstandingly well realised finale. What happened to the Rome Ninth is not explained. Ever since student days in Vienna with Toscanini fanatic Hans Swarowsky, Abbado has been in semi-permanent revolt against the Italian school of Beethoven interpretation. In these vibrant Rome performances he achieves an intensity of effect his hero Furtwängler just might have approved.

Ever since student days in Vienna with Toscanini fanatic Hans Swarowsky, Abbado has been in semi-permanent revolt against the Italian school of Beethoven interpretation. In these vibrant Rome performances he achieves an intensity of effect his hero Furtwängler just might have approved.

DG issued a Berlin/Abbado cycle of the Beethoven symphonies, taken from live concerts in Berlin, eight years ago. Numbers 1-8 in this new set derive from concerts in Rome in 2001 that the Italian conductor now prefers. “Our interpretative vision had matured and become more natural and shared,” he writes in the notes... Abbado’s lithe tempi and momentous unfolding of Beethoven’s great orchestral dramas sound even more vivid here than in the Berlin-recorded set. The most obvious gain comes in the sometimes least-regarded even-numbered symphonies, in which Abbado’s scrupulous attention to instrumental detail in the Jonathan Del Mar critical editions, and his almost Haydnesque brio in the outer movements, are wonderfully uplifting. I can’t think of more satisfying modern-instrument accounts of the exhilarating allegro vivace of the B flat major symphony (No 4) or the finale of the F major (No 8), while Abbado’s power and dynamism propel the Eroica and the Fifth inexorably to their triumphant conclusions.