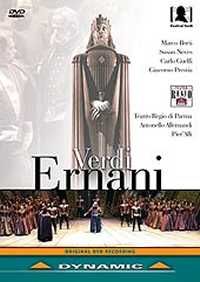 The première of Ernani at Venices’ Teatro La Fenice in 1844 failed to come up to Verdi’s expectations, primarily because of the poor health of some of the singers. Both critics and audiences, however, soon warmed to Ernani, especially after the following performances. The opera contains some of Verdi’s most successful, impassioned arias (first and foremost Elvira’s cavatina and Silva’s cantabile) and clearly denoted an evolution in terms of dramatic structure, more cohesive and with lesser use of blocks of closed numbers. Despite a turbulent ’premiere’, Ernani became a real international success, beginning with the felicitous Vienna productions of May/June 1844. The cast of this Teatro Regio of Parma production features some of today’s best singers for this type of repertoire.