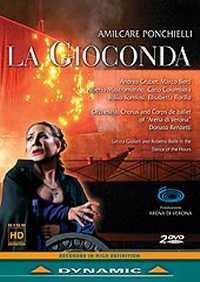 Gioconda is rarely performed, except for the famous Dance of the Hours, which became popular also thanks to Walt Disney’s Fantasia.

This co-production of Arena di Verona, Barcelona’s Teatro Eliseo and Madrid’s Teatro Real, directed by Pier Luigi Pizzi, is quite stunning. In the cast are Andrea Gruber, Carlo Colombara, Marco Berti, Ildiko Komlosi, Elisabetta Fiorillo and, debuting in the Dance of the Hours, Roberto Bolle, star of La Scala who has appeared in the most important theatres of the world. This music, on which Ponchielli worked for twenty-six years, seems to prefigure Puccini while, at the same time, echoing Verdi. To date Gioconda is one of the works most loved by audiences.

The opera was filmed in High Definition (HDTV).