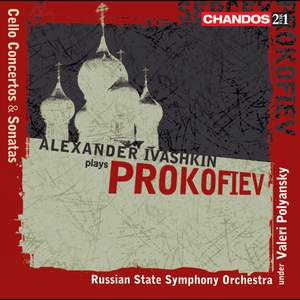 Having received glowing comments from the critical establishment on original release, Chandos brings together Alexander Ivashkin’s performances of Prokofiev’s Cello Concertos and Sonatas for the first time as a 2-CD set. Prokofiev’s love of the cello began early – he composed his Ballade aged scarcely 20 – and lasted throughout his life, fired by his friendship with Rostropovich. His very last composition was the Sonata, Op. 133 for solo cello, which he began on the latter half of 1952 but left unfinished at his death in March 1953. Towards the end of his life Prokofiev also engaged in the composition of three major works featuring the cellos as solo instrument. All three were inspired by Rostropovich. The Sonata, Op. 119 for cello and piano (1949) was followed by the Sinfonia Concertante, Op. 125 for cello and orchestra (1950-51, revised 1952) and the Concertino in G minor, Op. 132, also for cello and orchestra. Ivashkin gave the premiere recording of the Concertino. The Strad wrote, “This is wonderful playing, best of all is Ivashkin’s understatement whose artistry reveals many fascinating layerings. Alexander Ivashkin is recognised internationally for his interpretations of Russian music, especially the music of Prokofiev, Shostakovich, Schnittke, Gubaidulina and Kancheli. The Telegraph on his Prokofiev performances, “It would be hard to imagine a better advocate for these works than Ivashkin… His rich tone could have been made for Prokofiev’s lush melodic writing…” Ivashkin is joined here by the Russian State Symphony Orchestra under Valeri Polyansky.