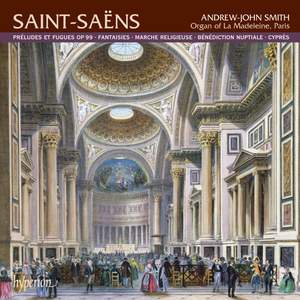 Andrew-John Smith's clever programming alternates the Three Preludes and Fugues, Op 99, with the three Fantaisies and other works. Wisely, he begins and ends the CD with the loudest and most... — Gramophone Classical Music Guide, 2010 More…

Despite his modern fame, much of Saint-Saëns’s music was under-appreciated in his lifetime, and many of his organ works remain little known. His adherence to Classical principles - enshrined in the works of his idols Bach, Mozart, Schubert and Mendelssohn - and his antipathy towards what he perceived as the louche modernism of the Romantic movement hardly endeared him to congregations or clergy, long gorged on the fripperies offered by contemporary organists and somewhat resistant to being ‘told what was good for them’.

But as a performer his prodigious talent could not be ignored and by 1858, aged just twenty-three, he found himself at the console of Aristide Cavaillé-Coll’s brand-new organ at La Madeleine in Paris - four manuals, 48 stops and an unprecendented symphonic wall of sound lay at his disposal. (He also found the instrument, occupying the entire West wall of this enormous edifice, spacious enough to accommodate a constant stream of stars from the international musical firmament, including Liszt, Sarasate, Clara Schumann and Anton Rubinstein.) He was to hold the post for some twenty years.

The earliest works in Andrew-John Smith’s programme were composed during Saint-Saëns’s tenure at La Madeleine and it is a rare delight to be able to hear them performed on the organ the composer knew and so loved (and using only the registrations available to him at the time). For later compositions Smith employs some of the subsequent additions to Cavaillé-Coll’s original conception; the effects are thrilling and reflect contemporary reports of Saint-Saëns’s own performance practice - much of it unusual then and now - as his travels took him around France playing Cavaillé-Coll’s ever-more gargantuan organistic creations.

The English organist and conductor Andrew-John Smith was educated as an organ scholar at New College, Oxford and the Sweelinck Conservatorium, Amsterdam. Described by Choir & Organ magazine as ‘a rare pleasure in Britain’ he performs regularly in Europe and has recorded and broadcast as soloist and accompanist both for the BBC and abroad.

Andrew-John Smith's clever programming alternates the Three Preludes and Fugues, Op 99, with the three Fantaisies and other works. Wisely, he begins and ends the CD with the loudest and most extrovert pieces, namely the E flat major Prelude and Fugue and the E flat Fantaisie. In between there are long stretches of quiet, introspective music, and listeners may long for the more dramatic compositions of Franck, Vierne or Widor. However, at his best Saint-Saëns has an originality and charm all his own; possibly no other French organistcomposer could have produced the delicate beauty of the B major Prelude or the Bénédictionnuptiale.
It's clear from his highly detailed bookletnotes plus his polished and stylish performances that Smith is an enthusiastic advocate of Saint- Saëns. What prevents this CD achieving its fullest impact is a cautious approach by player and sound engineers to the cavernous acoustic of the church of La Madeleine. The potential loss of detail leads Smith to adopt tempi which are sometimes slower than the composer's moderato and sans lenteur markings. Meanwhile the 1846 four-manual 58-stop Cavaillé-Coll organ is recorded close-up, and although we gain clarity we lose the sense of grandeur with a large instrument ringing around a massive edifice.
On the plus side, Smith's warm and sympathetic rubato is a constant delight, and his inspired choice to make the recording on an instrument played regularly by Saint-Saëns means that listeners can relish the authentic Gallic tones of the splendid La Madeleine organ.

…Smith's warm and sympathetic rubato is a constant delight, and his inspired choice to make the recording on an instrument played regularly be Saint-Saëns means that listeners can relish the authentic Gallic tones of the splendid La Madeleine organ.

[Saint-Saens' preludes, fugues and fantasies] are brilliantly played by the hugely talented Smith on the great Cavaille-Coll instrument that Saint-Saens knew.