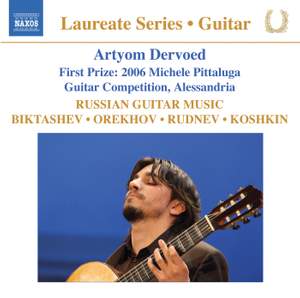 I. The mischievous prince

III. The doll with blinking eyes

Winner of several important international competitions, including the 2006 Michele Pittaluga Guitar Competition, Alessandria, Italy, Artyom Dervoed started playing guitar at the age of six. He has since enjoyed a career that has taken him to the United States and many European cities. This recital features works by contemporary composers from the Russian Federation, including Valery Biktashev’s masterpiece Orpheus, based on the Orpheus and Eurydice story, and Sergei Orekhov’s virtuoso The Troika Variations, closely influenced by Russian gypsy music.