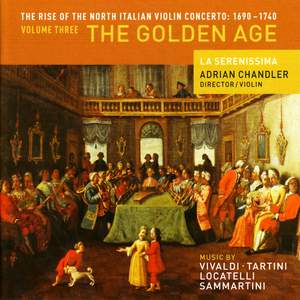 Born on Merseyside in 1974, Adrian Chandler studied both modern and Baroque violin at the Royal College of Music with Rodney Friend and Catherine Mackintosh. Whilst still a student at the RCM he founded the period ensemble La Serenissima with whom he has since performed numerous solo recitals and Vivaldi concerti in major festivals around the world.

His most recent CD releases feature virtuoso sonatas by Albinoni, Pisendel and Vivaldi (AV0018), Vivaldi Concerti and Arias (AV0031), religious concerti by Vivaldi (AV2063), the first two of three award-winning records (AV 2106 & 2128) charting the development of the North Italian Violin Concerto (NIVC) and Vivaldi cantatas and sonatas (Linn CKD 281). His performances have also been broadcast by BBC Radio 3, Radio Scotland, Dutch Radio, Radio 3 Belgium, Radio France, Danish Radio, Classic FM and Japanese TV. Adrian was awarded a three year AHRC (Arts and Humanities Research Council) fellowship at Southampton University in order to research the development of the North Italian violin concerto between 1690 and 1740. The culmination of this project is the release of this CD, the third of the North Italian Violin Concerto series.

…a well-chosen programme played with fervour and infectious esprit…

Chandler lets this music speak for itself in performances which are full of the uncomplicated and natural ebullience we have learnt to expect from his youthful group.

Although its title makes it sound like a particularly forbidding PhD thesis, this disc contains a hugely appealing and varied selection of works from the vast northern Italian late-baroque repertoire...All [concertos] are executed with flair and passion by Adrian Chandler and his expert team of period-instrument specialists.