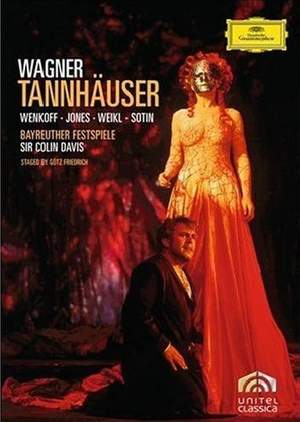 At last on DVD, a legendary staging which really did revitalise its subject. The staging's intensity, on a single stark rostrum, is supercharged by the committed, first-rate ensemble 1970s Bayreuth... — BBC Music Magazine, September 2008, 5 out of 5 stars More…

First DVD release of the first complete film from Bayreuth.

Choreography of the ‘Bacchanal’ by John Neumeier and set design and costumes by the international well known stage designer Jürgen Rose.

A superb cast led by Spas Wenkoff as Tannhäuser, Gwyneth Jones as Venus as well as Elisabeth and Bernd Weikl as Wolfram.

At last on DVD, a legendary staging which really did revitalise its subject. The staging's intensity, on a single stark rostrum, is supercharged by the committed, first-rate ensemble 1970s Bayreuth could still produce. The chorus is simply stunning, Wenkoff surpasses himself as a credible hero, sung with ardour and beauty. Jones is also in fine shape, singing with tragic fervour... This isn't a beautiful staging like the Met's, but musically superior and more dramatic.

…the performance is electrifying, managing the difficult feat of doing justice to Wagner's inspiration without seeking to gainsay its gloriously hybrid nature. Jürgen Rose's setting is austere, and one of the work's greatest moments, the astonishingly abrupt transition in Act I from the Venusberg to the idyllic countryside near the Wartburg, goes visually for too little. But the combination of Friedrich's tightly focused production and Sir Colin Davis's supremely flexible and energised conducting more than compensates. In 1978 Dame Gwyneth Jones was at her peak, taking time out from her definitive Bayreuth Brünnhilde to show how the roles of Venus and Elisabeth can be equally affecting, given maximum vocal and dramatic conviction. She weeps real tears in the mime that accompanies the Prelude to Act 3, as well she might, realising perhaps that she would never be better than this.

The sets are not opulent but are faithful to the composer's intentions and Sir Colin Davis's conducting is full of inspiration and vitality. The star performance is Gwyneth Jones's gloriously sung Elisabeth and Venus, but Spas Wenkoff is strong in the title-role and Bernd Weikl is a superb Wolfram.

Conducted by Sir Colin Davis, the score is interpreted splendidly