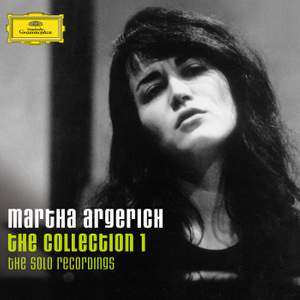 No. 2 in A-Flat Major: Allegretto

No. 3 in F-Sharp Minor: Vivace

Martha Argerich is one of Deutsche Grammophon’s most charismatic artists. Her recordings have been in the catalogue for more than 40 years. Many – like her Debut Recital of 1960 and her Chopin Preludes of 1977– are still bestsellers.

In the 1990s DG released the successful Martha Argerich Collection on 11 CDs. Now we are bringing out a completely revamped concept of the Collection, starting with the 8 solo LPs she made for DG between 1960 and 1983. These were among the most celebrated recordings of their time – each one a revelation of this unique artist’s genius. Here, for the first time, they have been brought together in one box-set, in chronological order, as originally programmed, with original LP-cover artwork on the individual CD sleeves, and all-new liner notes (by Jed Distler), plus some rare photos (including an unpublished one of Ms. Argerich with Friedrich Gulda in Vienna, 1955). The recordings are essential listening – especially since they have been newly remastered for this edition, with optimal sound quality. For those who know and love these recordings, this is the edition to have.

This box will be followed up by two further boxes to include Martha Argerich’s Concerto and Chamber Ensemble recordings for Deutsche Grammophon (2009).