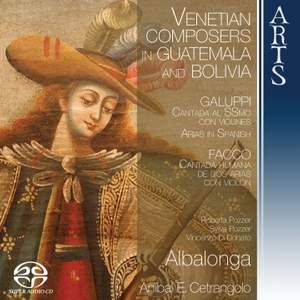 This new CD features world-premier recordings of restorations of musical works by two composers from the Venice region, Giacomo Facco and Baldassarre Galuppi, which are conserved in the Archives of the Cathedral of Guatemala.

Baldassare Galuppi was born on Burano island, on October 18, 1706. and died in Venezia on January 3, 1785. His fame during his lifetime came largely through his popular comic operas, although, as assistant chapel master at St Marks for several years he also produced a significant amount of church music. The composer, keyboard-player, violinist and cellist Giacomo Facco (1676 – 1753) was one of the many Italian musicians working in the eighteenth century at the Spanish court. He served as a member of the Capilla Real and taught the children of Don Luis and Don Carlos, the future King Luis I and King Carlos III.

Antonio Gaetano Pampani was born in Modena in Italy around 1705, and died in Urbino in 1775. After an early spell working at the opera in Urbino, he was maestro di cappella at Fano Cathedral between the years of 1726 and 1734. Later, as director of the chorus and orchestra of the Ospedaletto orphanage in Venice, he wrote oratorios, solo motets, along with other sacred music and concertos.

The ensemble Albalonga has produced several first modern-day performances of works by Latin-American composers as well as the recently discovered works of Giacomo Facco. Since its inception the ensemble and its conductor by Anibal E. Cetrangolo have devoted themselves to the recording of the colonial American musical heritage.