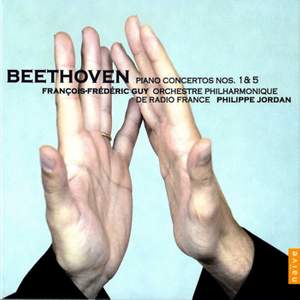 The Emperor Concerto… performance… it confirms Guy as one of the foremost pianists of his generation. — BBC Music Magazine, June 2008, More…

This is the first volume of a forthcoming cycle of Beethoven’s piano concertos performed by François-Frédéric Guy, the Orchestre Philharmonique de Radio France and Philippe Jordan. François-Frédéric Guy is now firmly established as a pianist of immense interpretative authority and superlative technique. He is especially admired for his performance of music from the Austro-German tradition. With his exceptional command of keyboard sonority he has a special gift for music of the grandest scale, such as the major works of Brahms, Liszt and Beethoven. His recording of Beethoven’s “Hammerklavier” sonata for Naïve was recently picked as BBC Radio 3’s “Building a Library” choice. He is now embarking on an important phase of his career when he will be playing all of Beethoven’s concertos and sonatas around the world, as well as appearing at festivals and international concert venues playing other music central to his artistic personality, including pieces by Brahms, Prokofiev and Bartok as well as a range of more contemporary music.

Philippe Jordan is one of the rising stars of the conductor’s world. He has recently been appointed as Music Director of the Opera National de Paris, starting in the 2009-10 season.

The Emperor Concerto… performance… it confirms Guy as one of the foremost pianists of his generation.

The Emperor abounds in intelligent, playful soloist/orchestra repartee… while the pearly tone Guy achieves in lyrical passages takes on particular beauty in the Rondo's hushed, descending chromatic scales and throughout the Adagio -

These performances can hold their own with the best….a most welcome, superbly recorded release.