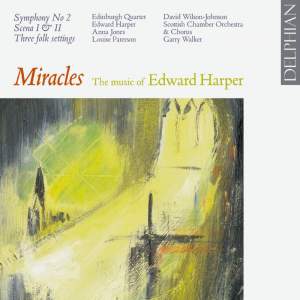 All the performances seem admirable in commitment and character, with David Wilson-Johnson in particularly fine voice in the symphony. — Gramophone Magazine, July 2008 More…

3 Folk Settings: No. 1, The Lowlands of Holland

Symphony No. 2: I. Overture

Symphony No. 2: II. The Turnen Stile

symphony by Edward Harper, setting it alongside chamber works by this

Harper's music is firmly within the British symphonic tradition, yet ranges wider still in its deeply felt response to human experience, from the 19th-century Dorset of William Barnes to a message of hope and reconciliation from the present-day Middle East.

Edward Harper was born in Taunton, Somerset. He studied music at Christ Church, Oxford, where he gained a first class honours degree, and at the Royal College of Music, London. Subsequently he studied for a further period with Franco Donatoni in Milan. Since 1964 he has been on the staff of the Faculty of Music at Edinburgh University, where he is a Senior Lecturer. He is active as a pianist and conductor and is the Director of the New Music Group of Scotland, an ensemble which has established itself as a significant and highly- valued part of Scottish musical life, as well as giving concerts in London and abroad.

All the performances seem admirable in commitment and character, with David Wilson-Johnson in particularly fine voice in the symphony.

Harper's gift for direct expression, uncluttered by fashion or obscurantist technique, was heard at its best here