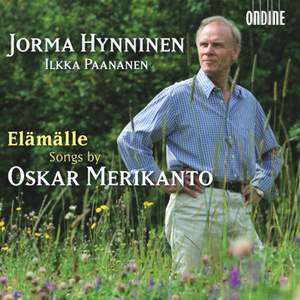 Finnish Song Compositions V, Op. 52: No. 2. Linnulle kirkkomaalla (To a bird in the churchyard)

No. 1. Kullan murunen (Thou Art a Nugget of Gold)

No. 2. Laulaja taivaan portilla (A singer at the gate of Heaven)

Jorma Hynninen is one of the most celebrated Finnish singers. This new disc contains the legendary baritone's very personal account of songs by his compatriot Oskar Merikanto (1868- 1924), which are worthy of discovery.

During his lifetime Oskar Merikanto was just as popular as Jean Sibelius. He was the co-founder of what would become the Finnish National Opera and composed major contributions to the song and opera repertoire: a real master of melody who incorporated elements of folk music into his songs, Merikanto rightly provokes comparison with such composers as Schubert and Mahler.

Jorma Hynninen has contributed not only to a renewal in the art of interpreting solo songs but also to the creation of contemporary operas by Rautavaara and Sallinen, to name but two composers. His greatest musical love though has always been Lieder, a genre on which he successfully concentrates on this new recording.

Hie brings immense authority to this repertoire and a vocal quality that shows only a few signs of strain in the upper reaches. Ilkka Paananen supplies top-class accompaniments, setting moods and turning corners with unfailing intelligence.

Take this disc uninterrupted and you could overdose on triple time, regular four-bar phrases and predictably fervent climaxes. But there are some memorable numbers here, including the swirling ballad Stormbird - a Nordic Sea Fever - the incantatory Evening Bells, and Annina, a gently insinuating Venetian barcarolle. Jorma Hynninen brings to his compatriot's songs a voice of craggy grandeur and an acute sensitivity to colour and atmosphere, whether in the romantic ardour of Apple Blossom or the bleak, blanched White Crosses.