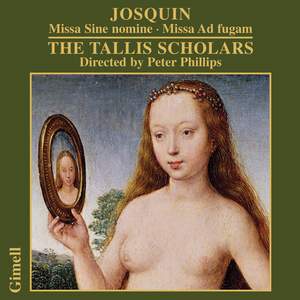 These two pieces have rarely been recorded, and yet they are great works from a truly great composer. …the standards of ensemble singing here are typically high, and the sound recording is a... — BBC Music Magazine, March 2008, 4 out of 5 stars More…

This recording presents the only two Masses by Josquin which are entirely based on canons; a single melody stated in different voice-parts at different times so that it overlaps with itself. To write this kind of music may sound academic to the modern mind: who is interested in mathematical scaffolding which most people can’t hear? But Josquin was interested in it – as were many later composers from Bach to Brahms to Webern – and I knew that, like every composer of genius, he would relish the challenge.

These two pieces have rarely been recorded, and yet they are great works from a truly great composer. …the standards of ensemble singing here are typically high, and the sound recording is a treat.

Sine nomine (without name) must be among Josquin's last and most perfect works. There are magically placed climaxes and contrasting passages with less tension. …the Scholars leave all the work to Josquin: they impose nothing, and the music projects very powerfully.

If you listen very closely you’re always aware of the canonical device – the clarity and precision of the singing, as well as Josquin’s writing, sees to that – but it’s equally possible – and acceptable, I’d suggest – simply to surrender to the wonderful music

The Tallis Scholars sing with clean, penetrating, though slightly top-heavy, sound, and Phillips shapes and paces everything lovingly.

It is a tribute to composer and performers alike that no listener would guess that this splendid music is written according to such a strict contrapuntal principle as the canon. Paradoxically, it is the mathematically complex Missa Sine nomine that actually sounds the more spontaneous and expressive.
Its long flowing lines, beautifully shaped by the Tallis Scholars, and transparent polyphonic textures - for which this two-to-a part ensemble is ideal - show Josquin's ability to transcend all the restrictions of this rigorous technique.

...there is no sense of hurry in the singing of Josquin Des Pres' Missa Sine Nomine and Ad Fugam, only of great passion and hard, driving, burning Italianate tone. At only two voices to a part, one sometimes misses the full depth and inspiring unison of 20 choristers. But it is hard to fault the clarity of contrapuntal line, the imitative balance across the parts, the exquisitely tuned fifths and octaves, the perfectly arched phrases, the undetectable breathing and the perfect rhythmic precision that makes the music dance and perhaps accounts for the voluptuous cover. Strange choice for a Mass otherwise.