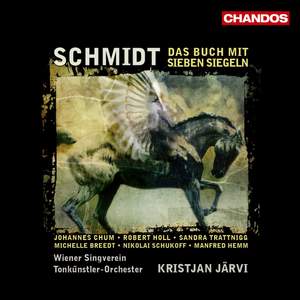 Where this new version really trumps both the magisterial… Mitropoulos and the over-boxy… Harnoncourt is in the quality of the recording itself, excitingly atmospheric… and… throated choral singing... — BBC Music Magazine, April 2008, 4 out of 5 stars More…

Seen by many as Franz Schmidt’s greatest work, Das Buch mit sieben Siegeln ambitiously sets one of the most challenging texts, the Book of Revelation, to music. In his programme notes for the first performance of Das Buch, he commented on the mammoth challenge of setting the entire Apocalypse to music and said his priority ‘was to bring the text into a form which retained everything important, wherever possible in the original wording, and yet reduce the immense dimensions of the work to a point where they could be grasped by ordinary human brains.’ The result is this magnificent oratorio, here performed by the Tonkünstler Orchestra and starring Dutch bass-baritone Robert Holl, who has almost become synonymous with the role it is so much his own.

Schmidt composed his oratorio Das Buch mit sieben Siegeln in 1935-7, when Schmidt’s health was quickly failing and with a particularly keen sense of his own mortality. The composition wittingly or unwittingly seems to tap into the feelings of the time, and his apocalyptic visions soon became realities.

Written at a time when the opposite poles of contemporary music were represented by the internationally renowned music of Schoenberg and Stravinsky. Their pioneering styles seemed at the time to be mutually exclusive and left little room for those who did not obviously adhere to one camp or the other.

Sadly Schmidt’s music seemed a highly conservative continuation of an outmoded romanticism, greatly influenced by his teachers Bruckner and Fuchs and his Hungarian origins. Today, with the benefit of hindsight, it is precisely Schmidt’s refusal to pander to modernistic trends that endows his distinctive contribution to twentieth-century music with a refreshing integrity and individuality and Das Buch is now justifiably seen, as one of the greatest epic works of the Twentieth Century.

Where this new version really trumps both the magisterial… Mitropoulos and the over-boxy… Harnoncourt is in the quality of the recording itself, excitingly atmospheric… and… throated choral singing and all-important brass. With Robert Holl a sympathetically soft-grained God and Johannes Chum a sweetly lyrical rather than heroically over-forced St John, this Book now stands as top choice.

Best known for his work with the left-field Absolute Ensemble, Kristjan Järvi might not be thought a natural exponent but there can be no doubting his conviction. He is abetted by a strong vocal line-up: Johannes Chum is a youthful and forthright St John who, though a little strained in his initial entry, exudes the right impulsiveness and awe; Robert Holl is eloquently authoritative as the Voice of the Lord; and with the remaining quartet well contrasted as soloists and finely balanced in ensemble. The Wiener Singverein lack nothing in either incisiveness or sensitivity, while the Tonkünstler Orchestra, if a mite undernourished in string sound, are more than equal to Schmidt's surprisingly wide-ranging demands.
Surprising in that this is a piece which marks a culmination within the Austro-German choral tradition and yet looks defiantly to its future – an aspect Järvi pointedly emphasises – whether in the stark expressive contrasts as the Seven Seals are opened, the powerful momentum unleashed by the Seven Trumpets, or the climactic 'Hallelujah' chorus whose grandeur is charged with a keen fervency.
More evocative than Franz Welser-Möst (EMI) but less theatrical than Nikolaus Harnoncourt (BMG), Järvi makes it the concert-drama Schmidt surely intended. SACD sound maximises its textural and dynamic extremes, but a pity that applause was retained at the end of disc 1. Even so, this could well be first choice for those new to the work.

More evocative than Franz Welser-Möst but less theatrical than Nikolaus Harnoncourt, Järvi makes it the concert-drama Schmidt surely intended. … this could well be first choice for those new to the work.

Jarvi conducts a well-played and sung account of the complex score, with fine contributions from Johannes Chum (St John), Robert Holl (Voice of a God, above), and a well-balanced quartet, although he can’t quite match the evangelistic zeal of Mitropoulos on the live Salzburg recording, with Dermota, Güden, Wunderlich and Berry as incomparable soloists.

When Franz Schmidt wrote his oratorio based on the Book of Revelation in the mid-1930s, it already sounded musically outdated, with its solidly Austro-Germanic contrapuntalism and nods to Bach, Handel and Bruckner. But, especially when performed with the vigour and bite of this new recording, one can forgive the work its backward-looking aspects and admire its musical glories.
It was taped live at the Vienna Musikverein, but audience "participation" does not detract from the superbly communicative St John from Johannes Chum and Robert Holl's sonorous Voice of the Lord. Kristjan Järvi's account can certainly stand comparison with the Vienna Philharmonic rivals under Harnoncourt (Warner) and Mitropoulos (Sony)