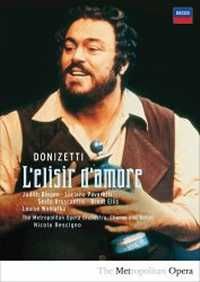 Filmed in 1981, live from the Metropolitan Opera, Luciano Pavarotti sings Nemorino in Donizetti's comic opera. This one of his Pavarotti's most famous roles and here he sings it in his prime joined by an all-star ensemble: Judith Blegen sings the role of Adina and the great comic baritone Sesto Bruscantini plays the wily Dr Dulcamara. Nicola Rescigno conducts. Kirk Browning's production is traditional and entertaining. Now available worldwide for the first time on Decca DVD.