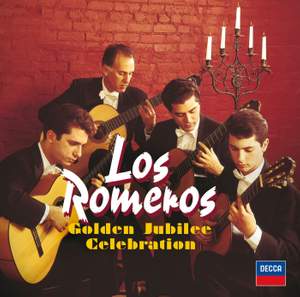 Vivaldi: Concerto for 2 Mandolins, Strings and Continuo in G, R.532

Described as “The Royal Family of the Guitar” Los Romeros celebrate 50 years as a guitar quartet in 2008. At the GRAMMY awards on 8 February 2007 Los Romeros were honored with the Recording Academy President’s Merit Award in recognition of their achievements. The story of Los Romeros started with Celedonio Romero (19117-1996).

A self-taught guitar virtuoso who taught each of his sons to play the guitar as soon as they were able to hold the instrument – thus Celin, Ángel and Pepe developed and brought the guitar to a global significance as individual soloists and as members of Los Romeros. The ensemble has commissioned and premiered new works and numerous arrangements over the past half century and began recording initially for Mercury (in the early 1960s) and then for Philips. This new compilation features recordings made over more than thirty years and features the ensemble as well as individual members of this remarkable family in a wide variety of original works and arrangements.