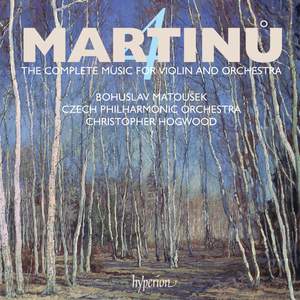 Offer, Martinu - The complete music for violin and orchestra Volume 4

In these beautifully recorded performances, both Christopher Hogwood and Bohuslav Matoušek have a profound understanding of Martinu's style and the Czech Philharmonic response with radiant playing… — BBC Music Magazine, September 2008, More…

This recording is the last volume of a four-disc survey of Martinu’s complete output for solo violin and orchestra, including compositions with other solo instruments. They are performed here by the orchestra in which Martinuo played the violin, the distinguished Czech violinist Bohuslav Matoušek who is one of the foremost living exponents of this music, and conductor Christopher Hogwood.

Martinu’s Violin Concerto No. 1 was written for the celebrated Polish-born American violinist Samuel Dushkin. Although immediately appealing to the performer, its premiere was delayed due to the volatile European political situation in the thirties, and the score was lost during World War II when Martinuo was forced to hide his autographs in Europe and flee to the USA. The score was discovered in 1968 and the work did not receive its premiere until 1973. It is a dazzling, virtuoso work, revealing the influence of Dushkin’s violin playing, especially his liking for technical display.

The Violin Concerto No. 2 is different from its predecessor both stylistically and in terms of its fate. It was commissioned by Mishca Elman (1891–1967), a famous American violinist of Ukrainian origin. The work’s main characteristics recall the qualities of Elman’s playing, notably his unique sound, his preference for noble and elegant melodies, his exceptional feeling for the sonority of his instrument, his love of slow tempos, and his rich use of rubato and portamento.

Bohuslav Matoušek demonstrates his great versatility in idiomatic performances of these contrasting works.

In these beautifully recorded performances, both Christopher Hogwood and Bohuslav Matoušek have a profound understanding of Martinu's style and the Czech Philharmonic response with radiant playing…

Martinu's two violin concertos have very different histories. The First was created for Dushkin in 1931, much tinkered with over the next few years and then 'lost' until unearthed in 1968.
The Second (1943) was written in just two months for Mischa Elman, premiered before the year was out and taken up by several violinists soon afterwards, often being programmed unnumbered until its predecessor came to light.
Josef Suk set the benchmark for both but his recordings, still in the Supraphon catalogue, have been overtaken by this newcomer and, in No 2, by Isabelle Faust's superb recent account (see below). Matoušek and Hogwood certainly have the measure of both scores and in the Second run Faust and Belohlávek close. Couplings may prove decisive; one recommendation is for the Hyperion set as a whole. Strongly recommended.

They are both delightful works and Bohuslav Matousek plays them with much style and virtuosity. As in other issues in the series, Christopher Hogwood reveals total sympathy with the composer's sensibility.