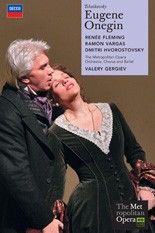 Luxuriously cast but staged with restraint, Robert Carsen's production as revived by Peter McLintock has already reached wide audiences through the Met's live screenings. For one, Onegin really... — BBC Music Magazine, April 2008, 4 out of 5 stars More…

This is a star-led performance of one of the most popular romantic operas with the unrivalled pairing of Fleming and Hvorostovsky as the doomed lovers. Their onstage chemistry, emotional singing and outstanding acting make this a truly special and unique production. Thousands of movie-goers watched this production live in cinemas across Europe and the US in February 2007, when the production and the singing of the central characters met with great critical acclaim.

Robert Carsen, described in the International Herald Tribune as 'one of the most sought-after stage directors on the operatic scene' creates an evocative and striking staging. Anne Midgette, reviewing this production in the New York Times, wrote, 'this remains one of the most extraordinarily beautiful stagings I've seen.'

Luxuriously cast but staged with restraint, Robert Carsen's production as revived by Peter McLintock has already reached wide audiences through the Met's live screenings. For one, Onegin really is central to the drama… Hvorostovsky's hero, always elegant in his long phrases, shows a human face to the rejection of the young and impressionable Tatyana and sensitively underlines the notion, heightened by Tchaikovsky's short duet of asides, that the senseless duel with his best friend Lensky might be stopped at any moment. ...Fleming comes into her own in the final blaze of passion, a truly cinematic scene between two charismatic stars. ...Gergiev conjures limpid but always well projected woodwind solos in the first act and powerful bass lines to emphasise lurking tragedy. He's also an inspiring presence in the short behind-the-scenes documentary.