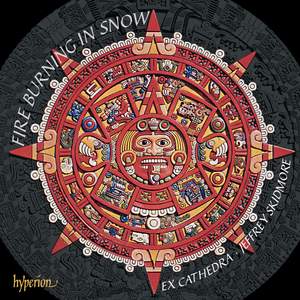 The performances are glorious. Soloists and choir sing lustily but stylishly, and the instrumental backing is aptly contrived. Even more than in past volumes, I found this release just plain... — American Record Guide More…

Ex Cathedra explore the rich legacy of a sixteenth-century Spanish composer who spent much of his career in South America, whilst the London Mozart Players focus on the music of an English lawyer who was also one of the most prolific English composers of the eighteenth century.

‘For fire burning in snow is the effect of love’. The final line of Juan de Araujo’s Dime, amor gives this recording its title and conjures up the passion and dramatic contrasts which make this disc such a delight.

Araujo has been described by many commentators as the greatest Latin American composer of the age, although much of his music is still rarely performed. Little is known about the man (he was a disruptive student in Lima and involved in litigation in La Plata), and there is almost certainly more material to uncover. He was born in Spain in 1648 and emigrated at a young age to South America with his parents. After a period as organist at Lima Cathedral he lived in Panama and Cuzco, where a few of his manuscripts are found, and from 1680 he spent the last thirty-two years of his life as organist at the cathedral of La Plata, now known as the Bolivian judicial capital of Sucre.

This disc includes one of his largest pieces, the triple-choir setting in eleven parts of the first great Vesper Psalm Dixit Dominus. This substantial setting is through-composed and vividly captures the dramatic elements in the text with a dazzling display of polychoral techniques. Silencio is a ravishing, double-choir lullaby which makes a complete contrast with the dramatic exchanges in the triplechoir ¡A, del tiempo! and ¡A, de la región de luces!. The fiery ¡Fuego de amor! is written for four choirs. The extraordinary imagination of Araujo in his choice of texts, his sensitivity to word-setting, his melodic, harmonic and textural inventiveness are remarkable, if not breathtaking.

The performances are glorious. Soloists and choir sing lustily but stylishly, and the instrumental backing is aptly contrived. Even more than in past volumes, I found this release just plain enchanting. Fine notes, full texts and translations. In all, one of those releases that is truly perfect! What an absolute treasure Hyperion has in Skidmore and his confederates!

The performances throughout can hardly be faulted. A lovely and varied sonority is created by soloists emerging and returning from the 14-strong choir.

Araujo was equally at home in sacred and secular pieces: the Dixit Dominus for three choirs is particularly attractive, and his secular music has an irresistible foot-tapping quality. We remain indebted to Skidmore and the fine vocal and instrumental forces of his Ex Cathedra ensembles for resurrecting this material. An important release

Captures the essence of music informed by the assured grandeur of 16th-century Spanish music, tinged with the colour of native 'Indian' culture and often marked by vibrant echoes of the regions' African slave communities … An unmissable release

The instrumental ensemble is exciting, vital, rhythmically alert … The music of Juan de Araujo … is unquestionably a good find

In addition to the singers at his disposal, it seems that Araujo probably made use of cornetts, sackbuts, shawms, flutes, harps, guitars and percussion. Jeffrey Skidmore incorporates all these exotic ingredients into Ex Cathedra's performances but the most impressive element is the precision, blend and sonority of his singers in a splendid setting of Dixit Dominus.

Araujo is rightly considered to be perhaps the finest composer of his age working in Latin America … This is a captivating, colourful recording which may breathe the stiller London air but audibly relishes the genius of the too-long-neglected Juan de Araujo

The standard of performance is unfailingly excellent. Ensemble work, both vocal and instrumental, is tight and the many vocal solos are all taken extremely well. The performances display flair and finesse on the part of all concerned Jeffrey Skidmore’s direction is perceptive, lively and, above all, persuasive...This is a CD that commands attention.

A hugely appealing, atmospheric disc … The reason we should bother with such an obscure composer is clear from the first note - the vivid contrasts and thrilling rhetoric found in Gabrieli and Monteverdi are developed and combined with a magical, dramatic, dark-hued Iberian sensibility

Followers of Jeffrey Skidmore's earlier excursions into the Latin American Baroque with his Ex Cathedra group should need no prompting to buy volume three … Nothing stifles the infectious spark of these mostly secular effusions by the 17th-century Juan de Araujo, cathedral organist in Bolivia. Uplifting, and foot-tapping

Another hit which you can't keep out of your mind

Araujo's music is very different: sophisticated and marvellously expressive, and Ex Cathedra makes the most of it. The poetry too is worthy of attention: Very enjoyable