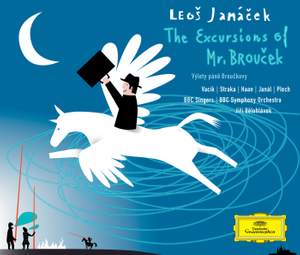 Janáček: The Excursions of Mr Broucek

The instrumental playing here is magnificent and the BBC Singers negotiate their often stratospheric lines with raw passion and enviable confidence. But what makes the whole performance of this... — BBC Music Magazine, April 2008, 5 out of 5 stars More…

The instrumental playing here is magnificent and the BBC Singers negotiate their often stratospheric lines with raw passion and enviable confidence. But what makes the whole performance of this opera so overwhelming is the dramatically convincing way in which the performers interact.

a major improvement on what we've had before: the strength and depth of the cast, and most of all the sound quality, and Belohlavek's feel for the tenderness, humour and romance of one of Janacek's least appreciated, yet most original dramas.

Mr Broucek's excursions may have carried him to the moon and the 15th century, but it took him longer to travel beyond his native land into the opera houses and recording studios of the world. But what a lovable work it is. The first excursion in particular is packed with vivid invention; the second dips deeper into wells of Czech history. It all needs the sharp hand and light touch with the agile rhythms which Belohlávek brings to it. He is not helped by a recording that sets the singers too far back and obscures a good deal of the words, especially in the chorus, though matters improve once the moon is reached. Jan Vacík gives a lively account of poor Broucek, first stranded among the moon aesthetes and then mired in religious controversy, preserving the little man's dignity and allowing him a touching quality that sees him through it all. If he lacks the warmth and the rounded character of Vilém Pribyl, this is still a fresh and attractive portrayal.
There is, as always, much doubling in the cast.
Peter Straka is an elegant Mazal and PetSík, lightly caricaturing his own elegance to send up the posturing Azurean poet. Maria Haan is a lively Málinka, putting on airs and graces for Etherea and returning to a fresh simplicity for Peter's lover Kunka. The many other parts include sturdy contributions from Roman Janál and Zdenek Plech, though the sense of atmosphere and the depth of feeling which lies under all the satire are richer with Jílek's handling of both singers and orchestra.

Belohlávek is at home here in a lively account of a loveable opera.