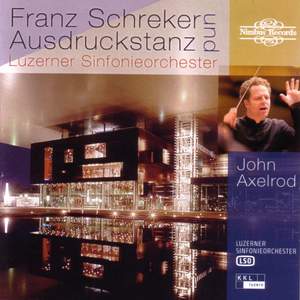 The main work by Franz Schreker on these discs is The Birthday of the Infanta (1908), a dance score inspired by an Oscar Wilde novel which later provided the subject for Zemlinsky's engrossing... — Gramophone Classical Music Guide, 2010 More…

No. 12, In lechter Bewegung

1907 two sisters, Grete and Elsa Wiesenthal, left the ballet corps of the Vienna Court Opera to devote themselves to the new realm of interpretive dance known as Ausdruckstanz. By 1908 they had many enthusiastic admirers, including Gustav Klimt, who invited the sisters to appear at the Kunstschau of 1908. The principal work of the Wiesenthals’ Kunstschau performances was a pantomime based on Oscar Wilde’s The Birthday of the Infanta with music commissioned from a then little-known composer by the name of Franz Schreker. The premiere on 27 June 1908 was an immediate success. Between 1908 and 1910 Schreker created six dance works that were either commissioned or inspired by the Wiesenthal sisters. This CD presents the first integral recording of the five works that survive

The main work by Franz Schreker on these discs is The Birthday of the Infanta (1908), a dance score inspired by an Oscar Wilde novel which later provided the subject for Zemlinsky's engrossing opera Der Zwerg ('The Dwarf', 1922). There are only a few anticipations of Schreker's later, hyper-romantic operatic style: most strikingly in a movement called 'The Mirror'.
But much of the music here has a lighter touch. Festwalzer und Walzerintermezzo is closer to Johann Strauss than to Richard, and the two string pieces on the second disc are accomplished, undemanding trifles. Most characterful is Der Wind (1909), a dance score which sounds like music for a silent film, responding with entertaining flexibility to an economical scenario.
The second disc couples Schreker's two string pieces, written in 1900 when he was just 22, with music by two of the many young composers he taught, later on, in Vienna and Berlin. The TwoSongs (1919) by Julius Bürger have an extravagant Schrekerian opulence in places, and these performances wring every last drop of intensity from their often rather solemn music, Dietrich Henschel coping admirably with Bürger's highlying phrases. (Nimbus unaccountably fail to provide the texts: a pity, though at least Christopher Hailey's booklet-notes are detailed and informative.) The main work on the second disc is the very un-Schreker-like Symphony No 1 (1921) by Ernst Krenek. Written when he was 21, it's unashamedly youthful, often sounding like a self-conscious gesture of disrespect to most of what then passed as Germanic tradition. There are signs of the anti-romanticism which was becoming increasingly fashionable, and a wealth of quirky, brash materials which almost manage to sustain one's interest throughout its not inconsiderable length. On both CDs, the Lucerne Symphony Orchestra perform with energy and spontaneity, and the recordings are particularly effective in revealing the many felicities of Schreker's expert orchestration.