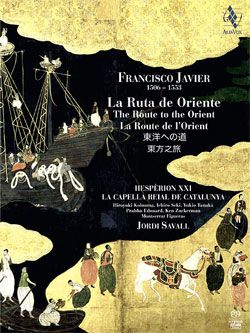 Francis Xavier - The Route of the Orient

Highlights here include performances by El Maloumi (oud), Zuckermand (sarod) and Seki (shakuhachi), while the singing of Yokio Tanaka (accompanying himself on biwa), though not an easy taste... — BBC Music Magazine, February 2008, 5 out of 5 stars More…

The viol player, conductor and musicologist pays homage to the sixteenth-century saint and Catholic missionary, who was a co-founder of the Jesuit Order.

Following the success of Christopher Columbus, this beautiful CD-book, in the same format as Don Quijote, with more than 300-pages including translations in Japanese and Chinese, enables us to discover hidden treasures from Asia through the life of Francis Xavier, a Spanish pioneering Roman Catholic Christian missionary who co-founded the 'Society of Jesus', the Jesuit Order.

Highlights here include performances by El Maloumi (oud), Zuckermand (sarod) and Seki (shakuhachi), while the singing of Yokio Tanaka (accompanying himself on biwa), though not an easy taste to acquire, undoubtedly displays great skills. Savall's regular colleagues - Hespèrion, La Capella Reial and the divine Figueras - are as superb on this recording as ever.

This interesting package traces Francis Xavier's life, from his birth in Navarre to his death off the coast of China. The music is beautifully performed and recorded. The first track, marking Xavier's birth, is an 'alba' played on the shawm. Vocal and instrumental pieces follow...