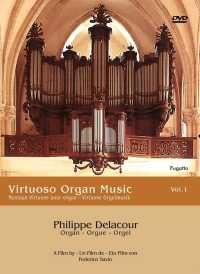 This first Volume of Fugatto's "Virtuoso Organ Music" features virtuosic organ music by Bach, Franck, Vierne, Dupré, Liszt, Messiaen and Alain, played by French organist Philippe Delacour. It was filmed and recorded on two great Organs in France: the Cavaillé-Coll of Notre-Dame in Metz and the Haerpfer-Aubertin of Chateau-Salins. Produced in 1998 and originally published in VHS format, this Video is now produced in DVD version.