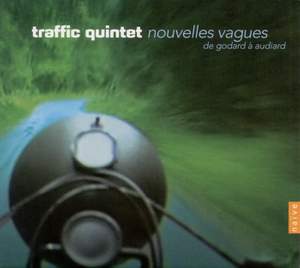 There is much in this issue about opera on film, but here is a reminder – indeed, I have never seen anything quite like this – of how film can be used by opera productions. Various theatre shows... — Gramophone Magazine More…

The “Traffic Quintet” takes its name from Jacques Tati’s film masterpiece of the same name and its eclectic, crossbred experiments aim at presenting a new take on the vast field of film music. By associating video creation and film music, the Traffic Quintet offers a new artistic space, a bridge between cinema and contemporary art.

The group synthesises the influences garnered by its founder the violinist Dominique Lemonnier who performs in several different orchestras including the Orchestre Philharmonique de Radio France, the California Chamber Symphony and the European Camerata, but also in the theatrical world with the likes of André Engel and Georges Lavaudant. The four musicians she invited to join her are Anne Villette, violinist in the Orchestre Philharmonique de Radio France and an enthusiastic interpreter of tangos and jazz; Estelle Villotte, now a violist in the Orchestre de Paris after playing in the ranks of the European Community Youth Orchestra; Raphaël Perraud, principal cello of the Orchestre National de France and concert soloist under the baton of Kurt Masur; and Philippe Noharet, a double bass player who divides his time between the Orchestra of the Paris Opéra, film music and contemporary works.. The qualities of the Traffic Quintet have found an echo in the work of the composer Alexandre Desplat, who has made for the Quintet this wholly new programme of free transcriptions centring on the Nouvelle Vague. A musical journey that corresponds perfectly to the Traffic Quintet’s wish to travel without labels between periods and genres.

There is much in this issue about opera on film, but here is a reminder – indeed, I have never seen anything quite like this – of how film can be used by opera productions. Various theatre shows have played around with the idea of moving projections and bits of film, but this production moves the form to a different level.