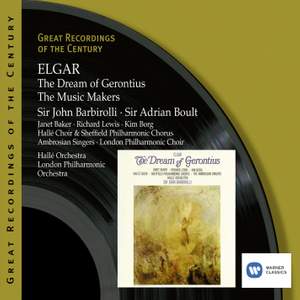 The must-have Gerontius, recorded in the idealised soundscape so beloved of the 1960s, where choir and soloists are close-miked and crystal-clear. Richard Lewis's well-groomed, classic tones... — BBC Music Magazine, December 2007, 5 out of 5 stars More…

We are the music makers

We, in the ages lying

A breath of our inspiration

They had no vision amazing*

And therefore to-day is thrilling*

But we, with our dreaming and singing

For we are afar with the dawning

Great hail! we cry to the comers*

Jesu, Maria - I am near to death (Gerontius)

Be merciful, be gracious (chorus)

I can no more (Gerontius)

Rescue him, O Lord...Noe from the waters in a saving home (chorus, Gerontius, semi-chorus)

Go in the name of Angels and Archangels (chorus, Priest, semi-chorus)

I went to sleep (Soul of Gerontius)

My work is done (Angel)

It is a member of that family...All hail! my child and brother (Soul, Angel)

But hark! upon my sense...Low-born clods of brute earth (Soul, Angel, chorus)

The mind bold and indepent (chorus)

I see not those false spirits...There was a mortal (Soul, Angel)

Praise to the Holiest...We now have passed the gate (semi-chorus, chorus, Angel)

And now the threshold...Praise to the Holiest (Angel, chorus)

Thy judgment now is near (Angel, Soul)

Jesu! by that shuddering dread (Angel of the Agony, Soul)

I go before my Judge...Be merciful, be gracious (Soul, semi-chorus, chorus)

Praise to His Name!...Take me away (Angel, Soul)

This 1964 recording of The Dream of Gerontius, though made over four days at Christmas in a miserable and foggy Manchester, has long been the version of choice in round-up reviews, most recently on BBC Radio 3 in Building a Library. Besides the leading Gerontius of his day, Richard Lewis, and the tremendous doubled chorus, it established Janet Baker as a peerless Angel.

The must-have Gerontius, recorded in the idealised soundscape so beloved of the 1960s, where choir and soloists are close-miked and crystal-clear. Richard Lewis's well-groomed, classic tones and Barbirolli's deep understanding result in a benchmark reading.