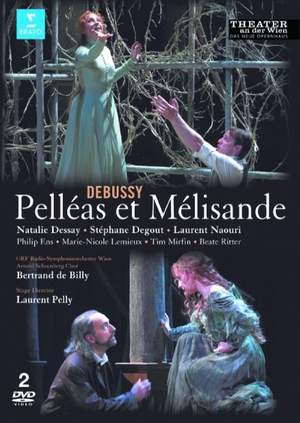 a stellar cast featuring Natalie Dessay, Stéphane Degout and Laurent Naouri lead a performance in which the subtle psychological and emotional strangeness of the opera is enhanced by Laurent... — David Smith, Presto Music, September 2014 More…

David selects some of the best recordings of the French Impressionist composer, Claude Debussy.

“There’s more to life than top notes,” Natalie Dessay has said. She has, of course, made her reputation with the florid, stratospheric heroines of Romantic French and Italian opera, but in this new DVD from Vienna she portrays a heroine who presents few opportunities for vocal display, but many for subtle characterisation – Debussy’s Mélisande. Dessay had sung the role just once before, in concert in Edinburgh in 2005. Pelléas et Mélisande is full of ambiguity and its vocal lines closely reflect Maurice Maeterlink’s often enigmatic text. A few unaccompanied, ballad-like phrases are the closest Mélisande gets to an aria.

Opera News reported: “In a pre-production interview, Dessay admitted that Mélisande poses few vocal challenges, noting that the role lies comfortably enough for both sopranos and lightweight mezzos. Indeed, the role is vocally a good fit for her — splendid, in fact … Every stage direction was scrupulously followed …Naouri, Dessay's real-life husband, particularly commanded the evening with his Golaud — gut-wrenching, magnificently sung and unusually young. For once, it seemed that Golaud and Pelléas really could be half-brothers, and Degout was Naouri's match, singing with gorgeous burnished tone and erotic passion. The magnificent Radio-Symphonieorchester Wien, under Bertrand de Billy, dominated the proceedings with a rapturous performance. “

Le Monde wrote that: “The orchestra exuded a subtly poisonous Debussy with a throbbing vein of Wagner, bruised by the Symbolism of Maurice Maeterlinck. Pelly excels in comedy, but here he took Pelléas towards the depths of Edgar Allan Poe’s Fall of the House of Usher [a subject explored by Debussy in an unfinished opera]… in Chantal Thomas’ mangrove-swamp décor, with its tall smooth columns (tree trunks or pillars?), shipwrecked remains, stylised rocks and curtains of lianas … With her flowing blue dress and long blonde hair Dessay was indeed like ‘a bird from somewhere else’ [a quotation from the libretto]… Stephane Degout was brimming with vocal sex appeal … Laurent Naouri provided an exemplary portrayal of Golaud.”

The Wiener Zeitung praised Laurent Pelly for bringing “a psychological dimension to the symbolically charged language. At his disposal was an ensemble of singers capable of the most refined interpretation, above all Natalie Dessay … who portrayed her character with the most delicate nuances and verbal flexibility, encompassing both vocal radiance and broken utterance … Billy’s interpretation embraced detail, concentration and intense expanses of sound. He followed the singers’ every word. On the first night the audience cheered singers, orchestras and conductor unreservedly.”

a stellar cast featuring Natalie Dessay, Stéphane Degout and Laurent Naouri lead a performance in which the subtle psychological and emotional strangeness of the opera is enhanced by Laurent Pelly's organic staging.