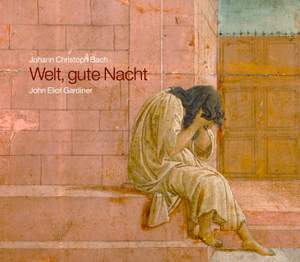 Bach of any generation from Gardiner's eminently engaged and engaging forces is self-recommending; yet for its rarity value alone Welt, gute Nacht is as important a release as that of a B minor... — BBC Music Magazine, December 2011, 4 out of 5 stars More…

This album was recorded live at Cadogan Hall in 2009. It features internationally acclaimed singers, including Matthew Brook, Peter Harvey and Katharine Fuge. It is packaged in a hard back book similar to our other releases. It contains a 48 pages booklet with original notes by Richard Campbell (to whose memory the recording is dedicated), and texts in German, English and French.

The live concert was billed “Six funerals and a wedding”: the pieces evoke the dark theme of grief, as was fashionable in 17th century Lutheran Germany; though the last track “Meine Freundin” is a lighter amorous dialogue The music on this album is in turn dark, poignant, humane and witty It features choral music (motets) as well as solo arias and laments, and two dialogues Johann Christoph Bach (1642-1703) - not to be confused with Johann Christian Bach, was Johann Sebastian Bach’s older cousin. A respected composer in his lifetime, he greatly influenced JS Bach’s music making.

Bach of any generation from Gardiner's eminently engaged and engaging forces is self-recommending; yet for its rarity value alone Welt, gute Nacht is as important a release as that of a B minor Mass or St Matthew Passion.

Vocal soloists and instrumentalists alike bring JC Bach's intense Lutheran feeling to life, each piece taking the lsitener on an emotional and musical journey. Vocal lines are beautifully and cleanly phrased, with a lovely overall balance of voices...Gardiner's interpretations are as beautifully researched, judged and executed as always.

His music has a less complex surface than the more familiar oeuvre of Johann Sebastian: it invites contemplation...With soloists of the calibre of Katherine Fuge and Peter Harvey, John Eliot Gardiner and his ensemble have uncovered a treasure trove. Their performances communicate not just skill, but delight in the world behind the music.

Nearly every piece has a singular gesture or feature that captures the imagination...The vocal soloists acquit themselves well in music that demands utter commitment, although just occasionally the very last degree of refinement and control eludes them...In a cappella formation, however, they offer some of the disc's most memorable moments

There's not a single weak link here: even the simplest choral harmonizations are loving crafted and the long 25-minute wedding dialogue never flags for a second. Gardiner and his team sound as though they love this music, delivering dramatically inflected performances, which, partly becuase they are live, have that extra edge of emotional and rhetorical reach. The recording is one of the best I've heard on the Soli Deo Gloria label.

This older Bach’s spare textures and bold chromatic effects make him a highly individual voice in this penitential but deeply moving music. Peter Harvey’s bass and Claire Wilkinson’s mezzo shine out from this “choir” of soloists, but Gardiner is the driving force.

This fascinating collection, based on a concert that John Eliot Gardiner conducted at Cadogan Hall, London, in 2009, covers a good range of Johann Christoph's surviving output. The two five-part motets are intense, slightly dour affairs...the two arias are also haunted by death, though, like most of the works here, the harmonic richness of the music makes them seem anything but lugubrious.

It's as elegantly poised as you'd expect from Gardiner, with the eight singers accompanied in sombre period arrangements by the English Baroque Soloists, in which the violas da gamba seem to weep.

CPE Bach called Christoph "the great and expressive composer", and here the marvellous Lament (the excellent Matthew Brook) and quirky Dialogue (with its endlessly varied Chaconne) amply bear this out in superb performances by Gardiner's consort. Christian's unusual Requiem is no less striking in its force, but more conventional in its language.